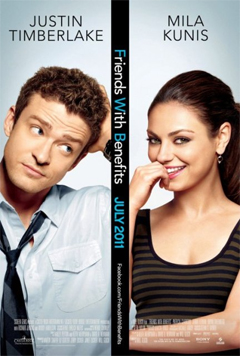 After a fairly strong comedy like Easy A, Will Gluck’s latest film Friends with Benefits is just another addition to the recent influx of romantic comedies that deal with not wanting relationships. It goes to show that no matter how many laughs you can try to deliver by switching actors and minor details, you inevitably end up with the same tired story.

The film begins with an amusing start as Dylan (Timberlake) and Jamie (Kunis) are both respectively dumped by their significant others (played by Samberg and Stone). Jamie works as a head-hunter for multiple companies who ends up offering Dylan the chance to becoming the new art director at GQ magazine. As they travel to New York together and Dylan gets the job, the friendship between the two grow.

During a night of watching romantic comedies together, Dylan and Jamie propose to have sex together – without any strings or ruining the great friendship that the two have built in practically no time. Soon enough, complications and emotions take hold of the two and their friendship is shaken up, pushing the two to wonder whether or not this situation is worth the risk of losing a good friend. During this on-again off-again companionship, they meet a colorful array of family and friends – most notably Jamie’s morally loose mother (Clarkson), Dylan’s father, sister and nephew (Jenkins, Elfman, and Gould), and the gay sports editor at GQ, Tommy (Harrelson).

Although the film does fare far better than Ivan Reitman’s film No Strings Attached – which also revolves around friends who want keep their relationship purely physical – it does fall into an unfortunate cycle that many romantic comedies fall into. Where Kutcher and Portman failed in chemistry though, Kunis and Timberlake shine. Mila Kunis has a magic in her that gives her the perfect chemistry with practically any actor in any film, from Natalie Portman in Black Swan to Jason Segel in Forgetting Sarah Marshall. Timberlake helps to provide plenty of the films laughs, and the sparks that fly between the two actors are really notable. It’s definitely a step down from his excellent job as Sean Parker in The Social Network, but amusing nonetheless.

As for the supporting cast, Clarkson’s mother-type here feels more forced than in Easy A, and it’s easy to see she does better as a mother who truly cares compared to the carefree woman she plays here. Harrelson’s overly masculine gay character drew plenty of laughs – specifically from the straight men in the audience – but that seems to be the audience they were going for. While it’s usually nice to see a gay character that doesn’t fall into a stereotype, the writing for him was far too strained and seemed to be going for way too much of an anti-stereotype instead of anything remotely realistic.

Jenkins and Elfman give the movie a serious tone that feels slightly out of place in a romantic comedy, striving to be something that will draw some more feeling out of us. Nolan Gould, however, brings back immense smiles whenever Dylan’s family is around by being just as adorable as he is in Modern Family – if not even more so. Stone and Samberg both provide plenty of laughs as well, setting up a great mood for the film and starting us off with the very break-ups that set our film into motion.

However much its characters may have been attempting to avoid Hollywood clichés, Friends With Benefits inevitably ends up playing out like just any other average, romantic comedy: enjoyable, but forgettable.