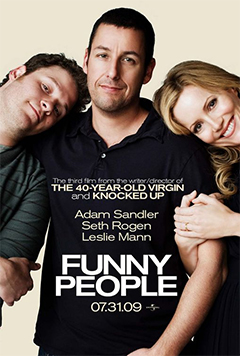 From the very start, Funny People hits hard by diving into far darker depths than anything Judd Apatow’s written before, leading into a mature movie that won’t be for those expecting just another dumb comedy.

When famous comic George (Sandler) discovers he has a rare blood disorder with no clear treatment, he finds himself confronted with his mortality and begins to examine and regret many aspects his life. He finds comfort in taking Ira (Rogen), a struggling stand-up comedian, under his wing and forming a real relationship during his long journey through recovery.

Far from Apatow’s fun traditional comedies Knocked Up and The Forty Year Old Virgin, Funny People works as both an insightful drama and a comedy. It’s ambitious to take on a comedy in this manner, and that concept is sure to turn plenty of audiences off, but those who come in with an open mind will find themselves watching quite a movie. There’s a lot of focus on the characters here, none more than George, who spends most of the film reflecting on his life and wishing he’d made other decisions. Apatow breaks down this character and proceeds to build him right back from the ground up without simply delivering jokes one after another, but that doesn’t mean it’s without humor.

The crude humor is kept in balance by a lot of dark writing and plenty of emotional conversations which are atypical for a comedy. There’s no real structure in this lengthy piece, and it’s as aimless as life itself seems sometimes, but there’s something here that you can’t get in most comedies nowadays. The original premise may get a little lost in the last act as the film sticks to exploring George’s relationship with his lost love Laura (Mann), but it never completely loses its touch with the harsh reality it’s trying to look into.

Adam Sandler is on the same level here as he was back in Punch-Drunk Love, and it’s a shame we don’t see this side of him more often. He does an amazing job with George at his lowest points and is just as wonderful with the lighter bits of the role. Seth Rogen gives a mature and tender performance while Leslie Mann brings a lot of vulnerability to her character, and both of them work wonderfully alongside Sandler.

At the end of the day, Funny People is the kind of movie that stands out in the tired comedies that come out each year. Sometimes depressing and often humorous, Judd Apatow shows that he has a lot to say with this one, and we can only hope to see more from him like this.