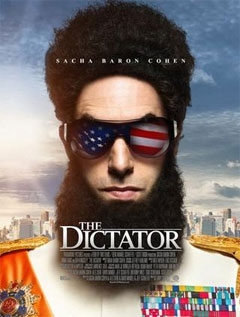 The Dictator is the latest endeavor of Sacha Baron Cohen at humor with social commentary. The result is, in general, better than Bruno but not as good as Borat. It is also easier to watch than both of them in terms of how vulgar and offensive the humor gets. It is still quite vulgar and offensive though, as you could see from the trailer [1].

This time, Baron Cohen has left mockumentaries behind and, working for the third time with Larry Charles (Bruno, Borat), he leads a scripted movie. In that way, The Dictator is similar to Baron Cohen’s first try at a leading role, Ali G Indahouse.

The Dictator is about the childish, sexist, racist, anti-American Admiral General Shabazz Aladeen (Baron Cohen), ruler of the fictional North African Republic of Wadiya. He refuses to sell his oil internationally and is developing nuclear weapons “in secret”. The UN gets tired of all his shenanigans and decides a military intervention is in order. Following the counsel of his deceitful uncle Tamir (Kingsley), Aladeen goes to the UN Headquarters in New York City to try and play them. Of course, once there, everything goes wrong and he ends up beardless and unrecognizable. He will have to work in the grocery store of activist Zoey (Faris), who doesn’t know who he is, while he tries to recover his place as “Supreme Leader”.

The film works as a political satire, especially because of a certain inspired speech near the end. As long as that is going on, we have the laughs, even when it feels it will be a bit much. Curiously, while some things are downright disgusting, it never goes “too much”. After Bruno, the low-brow humor is quite mellow in comparison. The physical (even acrobatical) humor though, that is still good, and the cameos and allusions to real people were good (if cheap) ways to make the audience crack up. Poor Megan Fox and Edward Norton though, especially the last one.

It is the romance subplot that’s not very good. Baron Cohen and Faris just don’t have a lot of chemistry, even if we get the metaphor and we can see why it was important for character growth.

But I forgive most of it because of the soundtrack. I need to buy that one, it is so entertaining. Besides the appropriate Arab music, it had cover versions of Marvin Gaye, Dolly Parton, R.E.M. and Dr. Dre & Snoop Dogg in Arabic.

In the end, despite some hit-or-miss humor, The Dictator is a good enough movie. It was a fine production and it had me at the dedication in the beginning.