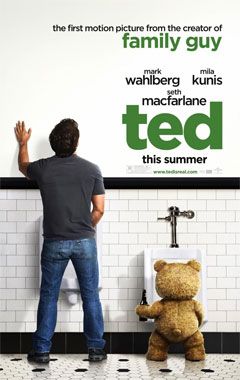 Ted is about John Bennett, a friendless kid who wishes on Christmas that his brand new teddy bear would come to life and become his first friend. It happens and it’s awesome… for a while. Fast-forward 27 years, and John Bennett (Wahlberg) and Ted (MacFarlane) still live together and they are still BFFs. Loser BFFs. Sadly, that bond is causing a strain on his 4-year-long relationship with Lori (Kunis), and John needs to grow up and leave his teddy bear behind.

Now, first things first, if you are not into Family Guy or appreciate Seth MacFarlane’s politically incorrect humor, chances are you won’t like Ted very much. Heck, Ted even sounds a lot like Peter Griffin. But underneath all the pop culture references, geeky stuff, music from MacFarlane’s iPod, and unapologetic drug use, Ted has a nice message about growing up, friendship, love, and owning up to your decisions.

In fact, I was pleasantly surprised about how well they managed Kunis’ character. In these kinds of movies, the girlfriend is usually made into a bitch for wanting to separate the best friends and ruining their “guy time”. But no, you can see how she’s in the right, and how Ted and John’s relationship enables John to make bad life choices.

Ted’s existence is treated realistically too. At first, he was a miracle, and became a celebrity somewhat. But people got used to him, and Ted was mostly forgotten, as is usual with those has-beens that never amounted to anything more than their short fame. But Ted also got creeps who remember him a tad too much.

So, yes, if you are looking for a funny movie with rom-com elements, low-brow humor, celebrity bashing, violence and even a car chase, Ted is your movie. Who knows, maybe it will touch your heart too.