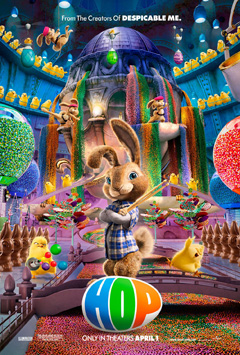 I don’t like Russell Brand that much, but I kind of like James Marsden and Kaley Cuoco against my better judgement. Also, I don’t mind Hank Azaria doing funny voices and accents, I actually think it’s one of his better features. That’s the reason I tried to stay as far away from Hop as it was humanly possible, but life has some of those funny ways to not let you do the things you want.

Hop begins as a perfectly fine tale about the lineage of the mystical Easter Bunny, who happens to live in the mysterious Easter Island (very close from where I live). The current Easter Bunny in charge (Laurie) runs a super high-tech operation to give children around the world their chocolaty and candy goodies alongside the chicks, all lead by the evil-looking Carlos (Azaria) who’s been the Easter Bunny’s right-wing and aches to be able to be the next in-line to become the Easter Bunny, a role that’s going down to the Easter Bunny’s only son, E.B (Brand).

As an innocent bunny, E.B grows up admiring his father’s job, but as he grows older and his father’s expectations grow for E.B to take the reins of the Easter Bunny’s “business,” E.B finds his passion for drumming. Adamant to not follow in his father’s footsteps, he escapes to Hollywood where he meets Fred (Marsden) who has just been informed by his family — father (Cole), mother (Perkins), sister (Cuoco) and adopted little sister (Espensen) — that he’s been kicked out of the house for been a disillusioned jobless slob. You see, when Fred was a little kid, he got a glimpse of the Easter Bunny delivering the Easter goods and hasn’t been able to move on.

Though the animated introduction was imaginative, Hop lost everyone once it went live action on us, excluding the part when they did their version of I Want Candy, which is as catchy a fluff song can be so why wouldn’t you? Though it should be easier for adults to connect with Fred’s story as an unemployed man looking for the perfect job, it just never feels urgent- Dude gets to live in a mansion for a few days as he’s babysitting his sister’s boss’ dogs. He’s chasing his dreams while he meets a talking bunny that plays the drums and poops jellybeans, yet it fails to be remotely funny or somewhat endearing. Oh, we see what you did there with the Playboy mansion being the place for Bunnies, as we see what you did there with The Hoff and the talking car joke. I see you want to appeal to grown-ups too, but it doesn’t work.

The live action in Hop, which is -at least- 80% of the story, sucks the life out of anything that could have been salvaged from this wreckage.