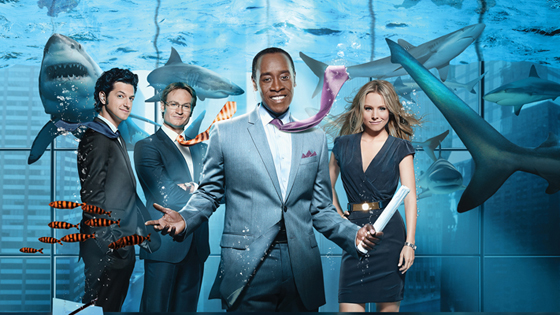 Showtime’s House of Lies (also stylized as HOU$E OF LIE$) — based on Martin Kihn’s book titled House of Lies: How Management Consultants Steal Your Watch and Then Tell You the Time — takes a behind-the-scenes look at the world of management consulting.

“The only thing that we need to figure out is what makes them think they can’t live without us for the next three years while we infect the host and bleed them dry.”

The show follows Marty Kaan (Don Cheadle) and his management consulting team — or “the Pod”, as he calls them — as they work [read: con] with their corporate clients by solving their biggest problems, even though everything Marty says to them is a lie. However, things start to change for Marty and the Pod when Marty’s boss, the “Rainmaker” (Griffin Dunne), announces a merger between MetroCapital and his company Galweather. Not something Marty would like… especially when he made a huge enemy out of MetroCapital’s Greg Norbert (Greg Germann) in the pilot episode.

Congratulations to Don Cheadle for his Outstanding Lead Actor in a Comedy Series Emmy nomination. Cheadle’s fiery performance as the amoral, self-loathing anti-hero — you don’t get to see black actors playing anti-heros often — Marty Kaan is the best part of House of Lies. He’s a dark, complicated character who is slick and sharp when he’s conducting business affairs, but he also comes across as a massive asshole and hardly relatable given how he carries his life… especially when it comes to his relationships with his ex-wife Monica (Dawn Oliveri) and stripper-turned-girlfriend April (Megalyn Echikunwoke). On the other hand, Marty’s father (Glynn Turman) or his gender-bender son Roscoe (Doris Leonard Jr.) — help to humanize Marty a lot and make him somewhat sympathetic.

That said, House of Lies is really hard to watch because of focus issues regarding the plots, pacing, going over-the-top very often, and its highly unlikeable characters. House of Lies tries to focus itself as a comedy at times, then a drama… or both at the same time while tackling management and the themes of sex and betrayal on a constant basis. The multiple focuses in every episode don’t work that well during the show — even worse, it kind of fails as a comedy (except for Marty). However, the dramatic aspects during the second half are the show’s strongest, especially when Marty’s life starts to fall apart regarding his family, while he fights against the merger between Galweather and MetroCapital before it bites him back in the ass.

While I don’t doubt that the world of management consulting has its share of corrupt and shady people, the over-the-top characterization works against the show’s already fast pacing. Marty is great to watch and Kristen Bell’s Jeannie is watchable as she deals with issues at work and in her personal life, but I can’t say the same for Doug (Josh Lawson) and Clyde (Ben Schwartz). They’re hardly developed douchebags who interact with each other fratboy-style. While Doug occasionally has some redeeming values, Clyde remains highly annoying to watch and he’s currently one of the least likeable characters on television. Monica’s also loathable, but her purpose is to make Marty’s life miserable at any price despite having hate-sex with him often.

House of Lies could have fared better if every episode lasted an hour instead of 30 minutes, so they could flesh out the characters and storylines better. You can tell that the writing team tried to cram plenty of interesting and uninteresting things, which ended up being quite messy.

Season 2 promises to explore the home lives of the other characters in more detail. This could be great for Doug and Clyde because if it worked for Marty, it can work for them too.