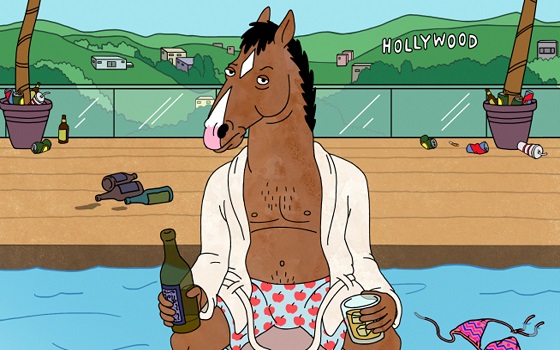 BoJack Horseman is Netflix’s first entry into adult animation territory (their animation debut happened with Turbo FAST) and stars Will Arnett as the voice of the titular character who was once famous for starring in 90s sitcom Horsin’ Around — you could say it’s a parody of Full House — as the caretaker of 3 children. But once the show ended, he became a has-been and hasn’t done much work except for screwing up relationships, drinking and hate himself.

In order to restore his celebrity status and become relevant to Hollywood again, BoJack decides to launch a tell-all autobiography. Against his wishes, Diane Nguyen (Brie) is hired to do the job because BoJack fucked it up by spending all the cash and not meeting several deadlines for the book’s publishing and almost sent Pinky Penguin’s (Oswalt, who also voices NAVY seal Neal McBeal) publishing company into bankruptcy. Diane’s hiring doesn’t suit well with him at first since she’s in a relationship with rival canine actor Mr. Peanutbutter (Paul F. Tompkins) and he’s not fond of sharing his personal experiences with anyone. However, they both get to experience change despite their different personalities clashing often.

BoJack boasts a big amount of guest stars, employs lots of dirty humor mostly through BoJack and it’s set in a world in which humans and animals live amongst each other: they hang out, work together, have relationships, do stuff and the show doesn’t make a big deal out of it: it’s just as normal as say, Her being nonjudgmental with Joaquin Phoenix’s character. The show is similar to Episodes [1, 2, 3] since BoJack shares similar aspects with the fictional Matt LeBlanc. Bojack displays plenty of mockery of BoJack’s career and the entertainment industry in general, at times with actors such as Naomi Watts and Margo Martindale having fun sending up their own images. While Arnett’s BoJack shines as much as LeBlanc does in his comeback show, the screenwriting is a mixed bag.

BoJack is surrounded mostly by stoner (and eternal house guest) Todd (Paul), feline agent and ex-girlfriend Princess Carolyn (Sedaris) as well as Diane and Mr. Peanutbutter. Todd serves as the voice of reason for BoJack and he’s the most likeable among the main characters, but his characterization is pretty much a meth-free Jesse Pinkman. There’s a Breaking Bad reference through them when — Spoiler: BoJack hired Martindale to trick Todd into buying a video game and sabotaging his rock opera stint, which mirrors Jesse learning the truth about Brock’s death — and you feel bad for Todd, despite being a weak link early on.

Meanwhile, Carolyn tries to make it into the agent business feuding against Vanessa Gecko (Chenoweth), but she also works for BoJack and also goes on-and-off with him sexually (and relationship-wise too), which takes a toll on her. Diane learns about herself while spending time with BoJack and her character arc is really interesting to watch from start to finish, which includes a visit to her family and helping out BoJack often when he gets in trouble. On the other hand, Mr. Peanutbutter had a similar career path like BoJack, but he didn’t screwed up his life and he’s friendly all the time, unlike BoJack.

The writing is pretty uneven, as we get a weak first half with hit-and-miss jokes/gags and brief hints at long-term storytelling [see: BoJack’s past and present] and made the characters quite unbalanced at first (except for Diane and Mr. Peanutbutter, who mostly remain consistent for the entire season), but BoJack in particular gets ultra unlikable and hard to watch given how he’s a massive jackass towards everyone and the jokes he’s provided with feels harsh. However, the second half is stronger and funnier, amping up the characterization (BoJack, Todd and Diane get stronger character depth), improving some of the weak links [see: Todd, Carolyn, screenwriting] — the Vincent character, though — and heads into dramedy territory as BoJack’s memoir writing progresses. We also get to see some pretty touching moments when it comes to Diane’s storylines and checking out BoJack’s mentor Herb (Tucci) as well as exploring BoJack’s past through flashbacks, explaining his personality. In the long run, Season 1 actually ended up being a good watch and I’m looking forward to Season 2.