Legend of a Rabbit 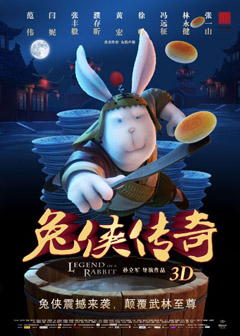 Legend of a Rabbit marks China’s first CGI animated feature length film. At a cost of $12M, it would be completely unfair to pit it against a Pixar or Dreamworks mega-production, which would at least get a $100M budget without counting marketing or going over-budget.

However, Legend of a Rabbit is definitely a nudge over the success that Kung Fu Panda [1] had in Mainland China, as it tries to capture a bit of the clumsy martial artist in Tu (Fan), an abnormally large white rabbit that makes a living making stuffed fried cakes. One day, on his front door, the Master (Pu) of the Howling Tiger Martial Arts Academy lies on the floor in the brink of death, being ambushed by the evil Panda Slash — KFP nudge? — who’s trying to take over.

Before it’s too late, the Master passes on his Kung Fu knowledge to Tu, and tells him to give his seal to his daughter Peony (Yan), who had recently run away to join the acrobatics circus.

Though the animation is anything but smooth — jerky at times with clumsy camera sweeps and a lot of poorly designed sets or repeated background characters, especially in the lighter scenes — we should be able to enjoy a film if a story has heart. However, Legend of a Rabbit seems to have little heart, despite Tu struggling with not being able to unleash the Kung Fu knowledge he’s got. We know he has it so his struggle is almost for nothing.

Unlike a film series like McDull, in which the little piggy is anything but perfect while trying and trying but never getting anything for himself but connecting us to his failure, Tu’s mastering of his martial arts comes in the way of almost divinity! In the end, other than him being able to do Kung Fu, Tu never really changes as a character throughout the whole film, so we never grow attached to him.

In terms of Kung Fu action, the film is a little weak, considering some of the best fighting sequences on film come from Hong Kong and China. It’s as if filmmaker Lijun Sun forgot to think of Legend of a Rabbit as a film, and thought of it just as an animated flick. Obviously, all is not his fault. The script also lacks better fleshed out characters, as well as better character development. If someone had taken a backseat during the writing of the script and asked themselves if this was working as an actual film maybe they would’ve made changes. Or in any case, they could have used technical consultation to make this more exciting.

Another issue with the international marketing for this is that if the film is targeted to a young audience, for its lack of complexity and simple humor, it’s possibly better to have the film dubbed instead of subtitled — as much as I’m against only-dubbed films. In the end, I think, as far as developing projects in the film industry goes, it’s better to start out with shorts… you know, like Pixar did!