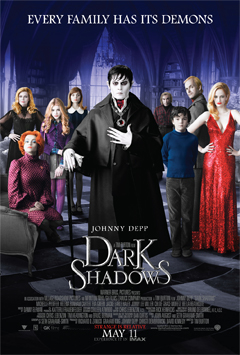 It’s impossible to deny that Tim Burton has made fantastic movies, alongside some downright horrible movies throughout his career. From the trailer, Dark Shadows seemed as though it could have joined the greats, but thanks to some very messy writing, it inevitably ends up falling into “The Average Zone.”

Burton’s film begins by introducing Barnabas Collins, a young man whose family set sail from Liverpool to America to start a new life. After decades of building the town of Collinsport from the ground up, everything seems wonderful for Barnabas, but after he breaks the heart of Angelique Bouchard, a curse is placed upon the Collins family. Rather than kill him, Angelique turns Barnabas into a vampire and buries him alive, leaving him to suffer in a coffin for almost two centuries.

Emerging in the 1970s, Barnabas returns to his home, Collinwood Manor, only to meet the remaining members of the Collins family, and discover that everything he once knew has changed. Finding out that his family has fallen out of favor with the town, Barnabas now works with his descendants to restore wealth and prestige to the Collins family.

The gothic feel in the first few minutes of the Dark Shadows is nice, but Burton’s style really blossoms in the 1970s setting. The entire opening sequences look straight out of a film from the period, and the costumes and set design really add to the way it captures the seventies. The soundtrack selection is especially terrific, featuring the likes of Alice Cooper (who makes an amusing cameo in the film), The Carpenters, Barry White, and The Moody Blues, all of whom overshadow Danny Elfman’s unmemorable score. This isn’t to say everything is great because there are more than just a few childish gags that don’t work, including a lot of scenes that could have massively benefited from an R rating.

Everyone performs well with the character they were given, although Depp could have done better by giving us a little less Jack Sparrow and a little more Sweeney Todd in this case. Eva Green steals the show with her performance as Angelique, flaunting her gorgeous looks and bouncing between menacing and delightful with each scene.

Pfeiffer, Harley, Miller, Moretz, and Bonham Carter all do their best to work with their characters, but more often than not they are thrown aside in plots that just go nowhere. It’s unfortunate to see a collection of talented people like this go to waste, and whether it’s Burton’s direction or Seth Grahame-Smith’s writing that’s to blame, we’ll never know (though I’m willing to bet on the latter).

Grahame-Smith, on his first time writing for a feature film, fails at creating a coherent set of stories for these characters. The main story is the vengeance plot between Barnabas and Angelique, which is the only one that works well throughout the movie, until it ends with an unfulfilling climax. He then throws in boring dialogue about family and secrets with Pfeiffer’s Elizabeth Collins, an interesting side-story with Bonham Carter’s Dr. Hoffman that is left unresolved and quickly thrown aside, and some daddy issues between Miller’s Roger Collins and his son David, played by McGrath, that are handled poorly as can be.

None of these are quite as terrible as the romance plot of the film and how they handled Victoria Winters’ character. Bella Heathcote seems like a promising young actress, but she’s given almost nothing to work with. There’s a scene where Eva Green throws up in an exorcist-like fashion that accurately sums up my feelings on how badly they wrote her character and the romance that accompanies it.

Dark Shadows could have been a great film with an R rating, better writing, and a lot less childish humor. However average it may be, it embraces the seventies nicely, provides a few good laughs, and is worth watching if only for Eva Green’s entertaining performance.