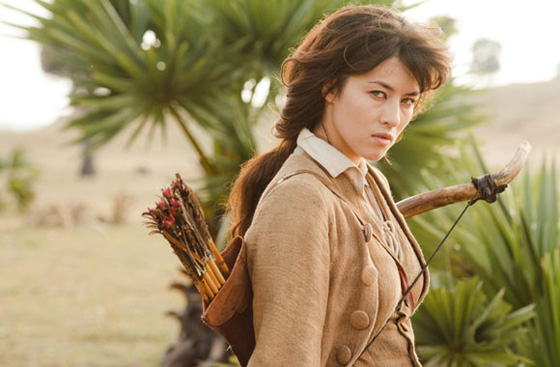 Based on the comic book series by Jean Van Hamme, the historical adventure Rani follows the trials and triumphs of Jolanne de Valoncourt (Mylène Jampanoï), whose life is ruined by the wicked schemes of her jealous and greedy half-brother Philippe (Jean-Hugues Anglade), and who is pursued by wicked lawman Laroche (Pascal Demolon). Many aspects of Rani appear cheesy — from dialogue to melodramatic turns, to various aspects of the production, editing, and camera work. The latter is saved by beautiful costumes and stunning locations shot in India.

Zig-zagging between problematic and positive, Rani engages colonial issues when Jolanne is sent to the French-governed Indian port of Mahé. France and India both have strict hierarchies at this point in time, and the show points out hypocrisy in both societies, avoiding certain traps of denouncing or praising one culture as savage or superior. The Europeans appropriate aspects of the “exotic” but are mostly frightened by or dismissive of actual Indian people and customs. Jolanne suffers from a miscarriage of justice from a European system, and finds that the church in Mahé takes a tithe from the brothel.  Being a French production, though, the show inevitably displays a more favorable bias towards France.

Jolanne herself waffles between calling French colonialism “a grand adventure” and stating her misgivings for Indian troops to fight in a war where ultimately one European power or the other will take over Indian land. Characters don’t remain quiet when Jolanne does not understand the ways of a class or culture. Before going overseas, Jolanne is saved by a group of brigands led by the “Black Angel” Gabriel (Doudou Masta), a son of slaves from Africa. Gabriel responds to Jolanne’s condemnations of thievery by stating that the poor women and men in his band were robbed and mistreated by those in power. Jolanne learns and adapts while maintaining charitable and pro-female ideals.

It’s laughable when this half-white noblewoman comes under the protection of the goddess Kali, and even fans found the finale a bit “much.”  What’s more intentionally enjoyable is the trope of shifting identities. Each episode’s title refers to a title Jolanne holds,  like “Slave” or “Queen.” Casting the half-Chinese Jampanoï as the half-Indian Jolanne does bring up representation concerns, but the series gives welcome attention to the theme of divided parentage and nationality. Jolanne is always cast apart due to features or personality, and a Frenchman who only sees her thighs scolds that her skin “wasn’t completely lightened.” She falls for the half-Irish English soldier Craig Walker (the unmistakably French Rémi Bichet), who only fights for the English oppressors of his mother’s land because of opportunity. A governor’s wife, Princess Jeanne Dupleix (Moroccan-Israeli actress Yaël Abecassis), is proudly one-fourth Indian and has never visited France. It’s unfortunate that the show largely treats Jolanne’s time in India as if she was simply exploring new land and not discovering her mother’s homeland.

Jolanne’s first and strongest love is for Walker, and several other men in her life range from lovers to friends. Yet her first scene has her sneaking  into the bed of her then-best friend Laure (Emma Reynaud, a surprising talent in later episodes), smothering Laure with sensual gropes and kisses. At the brothel in Mahé , Jolanne forms an entrepreneurial and romantic relationship with the Brahmin prostitute Indra (Gabriella Wright). The feelings of Princess Jeanne for Jolanne also waver between attraction and maternal affection. Scenes between female lovers and admirers toe the line between intimacy and titillation, and Jolanne is comfortable with her sexuality. The spiteful women who seek Jolanne’s downfall are balanced by Jolanne’s platonic friendships with females, especially among the wives of the Raj Ranveer Singh (Olivier Sitruk).

Rani‘s cast varies widely in talent, and better direction could have spared some disappointment. Mylène Jampanoï’s fierce attitude and slim but sturdy frame make her a believable ambitious heroine, and her striking beauty and playful smiles make her a plausible object of desire for so many characters. Yet, while I’m a big fan of the actress, I must admit that I found her performance inconsistent, at times reacting with stock directness to situations rather than reacting within her character. The blame may not be entirely hers, for she’s very strong when the writing has a good grip of Jolanne as an individual and not just a character type, especially throughout episode three.

Jampanoï said that she took this role because Jolanne refuses to be a victim [1]. Jolanne’s priorities are especially clear when rejecting one easy romantic ending in order to fix other matters. Rani may not be exceptional. It is remarkable, though, to see a television program feature a biracial, bisexual female adventurer overcoming impossible odds with smarts and strength in the eighteenth century.