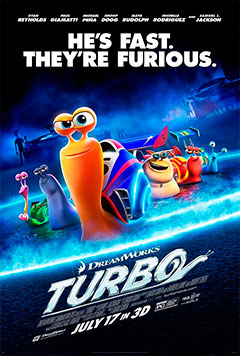 Turbo may not be one of the greatest Dreamworks movies, but it’s not meant to be either. Turbo just wants to be an entertaining movie for kids with cool animation, and it delivers.

Turbo has the classic plot of the misfit with big dreams who is also a bit of a klutz and causes troubles for his family. Until something awesome happens and others learn to believe in him while he learns about his inner strength. In this case, the misfit is a snail called Theo (Reynolds), and he dreams of being a racer at the Indianapolis 500. Enter Deus Ex Machina in the form of Theo getting sucked into the motor of a Fast and Furious car and fusing his DNA with the nitrous oxide, instead of, you know, dying. Theo, who renames himself Turbo, is now the fastest snail in the world, and he might be fast enough to achieve his dream.

Much like Turbo, the movie starts slow, showing the not-so-exciting garden snail life as well as Turbo’s dificult relationship with his brother Chet (Giamatti), who is a realistic party-pooper that tells him his dreams are stupid. The movie does pick up when Turbo and Chet are found by Tito (Peña), “Dos Bros” taco truck driver, who discovers the snail’s super powers and together they plan to achieve their dreams. Tito also has a brother, the chef of “Dos Bros” Angelo (Guzmán), who also believes Tito’s latest plan to make their life better is stupid. Yes, Turbo and Chet’s relationships mirrors Tito and Angelo’s.

While Turbo is a fine enough lead, it’s the supporting cast that makes you laugh and they are in general more interesting. We are talking about other (regular) snail racers and the humans whose decaying businesses surround “Dos Bros”. You are even more invested in their dreams and motivations than Turbo’s for a while. And they are the most diverse cast I have seen lately, besides the Fast and Furious franchise, with Latinos, Asians and black characters… OK, the black characters where snails, but still, the Samuel L. Jackson snail was cool, complete with Samuel L. Jackson references.

And the animation was very pretty. It was fast when needed, but also have lots of slow-mo, as well as lots of colors and lights… and a youtube sequence with dubstep included. The animation was especially good during the race. I found it more interesting than the Cars one, thanks to all the different perspectives achieved due to Turbo being really small.

So yeah, Turbo is not the best animated movie this year and I would be very surprised if it gets an Oscar nod, but the kids will have fun, and the adults won’t hate it.

BTW, just like Despicable Me 2, this movie left me craving Mexican food.