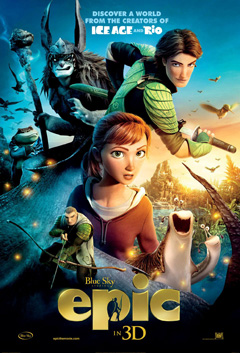 How up your own bum can you be to call your own movie simply “epic.” However you refer it, it always ends up being “epic american film” or “epic animated film”  — how much do you pay search engines so that your official website (and IMDb page) come out on top when searching for the term. At least the Spaniard and Latin American marketing had the good sense of calling it “el reino secreto” (the secret kingdom).

Anyway, marketing aside- Epic tells the story of a young woman named M.K (short for Mary Katherine and voiced by Seyfried) who arrives at her father’s in-the-middle-of-nowhere cabin. Professor Bomba (Sudeikis) has been immersed in his research of what he believes is a minuscule advanced society that lives in the forest; often deemed cuckoo, Professor Bomba lost the affection of his ex-wife and -by extension- his daughter due to the commitment to his work.

But of course Professor Bomba is right. There ARE tiny people known as Leafmen — led by Ronin (Farrell) — trying to defend their kingdom from evil skull-wearing creatures called Boggans, led by the most evil of all: Mandrake (Waltz… who else really?), whose stupid son gets killed as their legions try to ambush Queen Tara’s (Beyonce) choosing of a leaf pod as a heir, which would ensure the survival of her realm.

Having gone through the loss of her mother, M.K has had it with her father’s absent-mindedness, so she decides to leave telling him via post-it note. Before she can return to the safety of her world, however, she encounters Queen Tara — who has been shot dead and puts M.K in charge of keeping her leaf pod save until its bloom — and is shrunk to tiny Leafmen proportions.

Epic has all the elements necessary for your typical animated flick aimed at children — wacky character (Professor Bomba), authority figure (Ronin), rebellious youth (Nod, voiced by Hutcherson), wise-cracking dufus (the slugs, voiced by Ansari and O’Dowd), rocking lady that disappears at the beginning (Queen Tara)… Christoph Waltz as the bad guy. The stakes would be high for a film called “epic,” the destruction of our world and M.K’s possible disappearance from our world without her father EVER finding out the truth, but nothing is of consequence. The movie, especially the nature sequences, are beautiful for sure… but do we care by the end of it all? Do we care enough to give it a second watch, to feel bad for what they had to go through, and feel elated that they have achieved what they needed to do?

While the concept of a civilization of small people (alongside forest creatures) loosely based on William Joyce’s children’s book The Leaf Men and the Brave Good Bugs is interesting, the exploration of the world within the film stops being inventive after the death of Queen Tara. I also hated the ending because we all know royalty doesn’t work like that.

With a cast that includes Steven Tyler, Beyonce and Pitbull, Epic has more musical variety than any of the recent VMA shows.

Extra half a star for visuals.