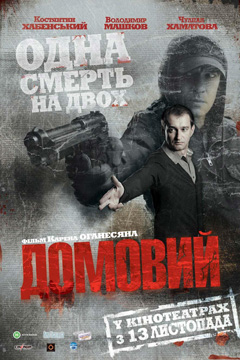 A writer’s worst nightmare is to get writer’s block. But what happens when he gets one at the same time he gets his midlife crisis and he feels his life is one big bore? That’s Anton’s (Khabenskiy) issue. He’s a crime writer of little success as pointed out at his book signing event, in which he gets mistaken for another author and gets told off by a fan for his latest book disappointment. But it’s that day when a man (Mashkov) arrives to his event and asks a very important question: “Have you yourself ever killed?” That’s when the adventure begins as the man leaves the bookstore to swiftly kill two people in the street with Anton as the only witness of his crime.

It’s the story of master and apprentice as Anton discovers the creative rush of playing hitman, against the better judgement of his girlfriend, Vika (Khamatova), who pleads him to stop drinking and working overnights.

Russia takes on the flashy thriller for the MTV movie-generation and does it with great efficiency with the ever-present dose of Russian dark humor — deaths! Ha, such a funny subject! Lead actor Konstantin Khabenskiy has a difficult role almost bordering on an unlikable character too desperate to be cool, but the script gives him enough features to make him sympathetic. But Vladimir Mashkov steals the spotlight from under his feet as the real cool villain of the movie. Going blind into Domovoy helps to his enigmatic Ghost persona, though, just to even think what his plans are and what the final reveal is. It’s so simple, one can’t even fathom the idea that everything happened for that reason.

Now you know, people — midlife crisis and creative blocks are dangerous! If a hitman (or another iffy subject) offers you an inside view to his world to end the stupor, it’s probably a bad idea to take him up on the offer. The movie is even fun when entering the world with the mind of a hitman — who in their right mind would touch a gun that’s not theirs without gloves? Are you so detached from your life that you would befriend a hitman?

Visually, it’s got little to envy of American action thrillers with the usual predominantly cold color palette — you can see it all throughout the Bourne series — as well as decent action sequences, blood to spare and dead people. I’m a little unconvinced about Anton’s relationship with Vika, though, as much as I love Chulpan Khamatova. It felt like one of those light-speed relationships with her storming from his apartment, to then asking him to change, having a bumpy physical encounter with Anton that suddenly had her on the rebound as quick as possible. I guess that’s one of the issues in these movies, even in flicks I loved like The Bourne Identity and Jason’s relationship with Marie, even if Marie did seem more part of Jason Bourne than Vika ever did with Anton.

Overall, though, Domovoy is a solid action thriller with quite strong acting for a weekend, especially if you’re looking for an alternative to Hollywood thrillers — haven’t seen a good one of those in quite a while.