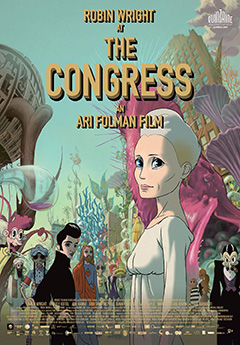 Ari Folman follows up on Waltz With Bashir with The Congress, which features once again the “actor/actress playing as himself/herself” card, something seen more frequently in television rather than film. This time, however, Robin Wright happens to be the main act in this partially animated film.

Based on The Futurological Congress novel by Stanislaw Lem, Folman’s The Congress features a constant dystopian setting and stars Wright as an aging actress who hasn’t had that great of a career lately — imagine this as if she never made it to House of Cards — and no longer has the same appeal as she possessed back when she starred in The Princess Bride or Forrest Gump. Currently, she suffers from lack of acting offers given the change around the cinema world as well as Wright being difficult to work with around the set and her choices in films. To make matters worse, Robin’s son Aaron (Smit-McPhee) is very sick and needs lots of medical care. Despite the bad things that are noticeable around Robin’s life, she gets a big offer from her agent (Keitel): sell her image to Miramount’s studio head Jeff Green (Huston), which will be scanned for future use in CG films and never act ever again… something other actors have already done.

Once Robin accepts the offer, The Congress turns into something that’s hard to describe and it’s totally worth watching if you can embrace the trippy ride that it transforms into when Robin crosses into the animated world (accesible through drugs) 20 years after she signed the offer. It’s sort of similar to Cool World, but a lot more striking, grim and packed with a bunch of interesting ideas that puts The Congress more into the realm of the first Matrix film.

Folman’s direction, along with the animation from Yoni Goodman, is really strong as The Congress showcases a grim future for the film industry (and the world) through Wright’s life earlier on, which is terrifying and gripping to watch thanks to an awards-worthy performance from Wright, who is always captating to watch and glues everything together in both human and animated form. We also get to see questions and answers regarding technology, science, identity, how people view and idolize celebrities and the future while also seeing Folman’s screenplay sarcastically taking shots at Hollywood. But what’s always consistent in The Congress is the love of a mother for her child, which is fantastically (and brutally) displayed near the end of the film after all the things Robin went through just to see her son one last time.

While Robin Wright shines strongly in The Congress, she’s also backed up by a great supporting cast. Keitel and Huston are great, while Smit-McPhee’s Aaron greatly displays innocence as Wright’s son and Paul Giamatti as Aaron’s doctor works well the film’s dramatic scenes when he’s involved with Wright. On the other hand, Jon Hamm voicing animated character Dylan Truliner, who explains to Wright and the audience how the world truly works while also playing up as an romantic interest. Hamm’s Dylan comes across as a bit distracting to the plot since he overexplains things, which is understandable considering the confusion of Wright regarding the toon world. But in the end, things work out well for the story thanks to Wright and some striking animated sequences in the toon world.

Highly recommendable to watch thanks to the screenplay, fusion of live action and animated scenes, thought-provoking ideas and Robin Wright’s stellar performance. You won’t see films like this very often, especially not in the way Ari Folman pulls it off.