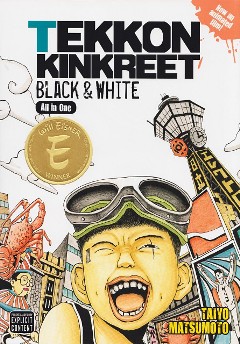 There’s certainly a level of wisdom and innate beauty in the raw and uncompromising nature of Japanese graphic novels. However, there are even those within the genre that manage to push the understanding of human nature to the very edges of its periphery. Taiyō Matsumoto’s Black & White cracks open your psyche and forces you to consider that perhaps your truth isn’t necessarily compatible with reality.

Welcome to Treasure Town — an abandoned metropolis brimming with grimy commercialism and the seediest scent of corruption. It’s overrun by an upended concept of justice, in which the long arm of the law is twisted in the clutch of the Yakuza. However, while the Treasure Town syndicate may claim ownership of the place, anyone with an inkling about where the power truly lay will tell you that The Cats — a duo of misfit orphans — run the town and its people.

Kuro (a.k.a. Black) has lived his life with the understanding that there are no prizes for surviving — there’s only survival at all costs. He believes his cynicism keeps him alive. But anyone with first-hand experience with the Cat Brothers knows the simple-minded innocence of his little brother Shiro (a.k.a. White) allows him to maintain control. White’s only wish is to live by the sea and eat apples all day. Whether he understands it or not, he recognizes the potential of life, how even on days where rain is imminent, something beautiful will bloom from the dampened concrete.

As the violence reaches an unconscionable level, Black’s hostility toward his hometown thickens and the monster that breathes just below the surface of his streetwise exterior — known as The Minotaur — begins to crawl through his skin. White uses his emotional openness to anchor Black for as long as he can. But when a greasy conglomerate head — aptly named Snake — conceives of a seedy theme park to rake in big money and boost the economic morale of the crumbling Treasure Town, Black’s self-control rapidly begins to slip. The Yakuza have become more brazen in their violence and the proverbial Godfather of the town is murdered. Then, the final pinprick in his side, White’s critically wounded by one of Snake’s bionic henchmen.

The Minotaur is set free, opening Black’s eyes to the inevitable darkness that blankets the world and urging him to revel in its inky shadows. Only White’s dove-soft purity can save Black from the oozing darkness that threatens to rot him from the inside out.

Black & White has to be the most striking manga I’ve ever read. Not only is the story dark and pulsing with thematic elements, the art forces one’s mind to navigate deep angles, sharp focus. The perspective pushes the reader to bend as the narrative arc bends. But the most frightening, and by extension brilliant, aspect of Black & White is the way in which Taiyō-san takes the readers on a journey through their own souls, imploring them to answer one question: is our morbid reality a small suggestion in our minds or has it already spread to a point where all it takes is a little push to expose its ugliness?

Tayiō-san exposes the frailty of humanity, but in the end presents his audience with a choice. Do we cede to the malignant poison within us or do we allow that one drop of purity to expand in our souls and eventually set us free? Ultimately, it’s this choice that makes Black & White one of the most unique manga ever written.