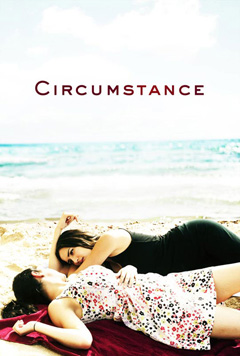 Raise your hand if you thought Circumstance was going to be handled in a similar vein to Thirteen, except in Iran: teen goes wild and Iranian parents must do something to veer her from an immoral life of licentiousness. Boy was I wrong.

The film tells the story of Atafeh (Boosheri) and Shireen (Kazemy), two lively and playful Iranian young women. They spend all their time hanging out with each other and brushing their hands against each other’s and being all over one another whenever possible.

Atafeh comes from a not-so-strict wealthy Iranian home, with both her parents being part of the revolution, and an older brother who’s back on track after getting lost in the world of drugs. Mehran (Safai) has become really religious, and pays his respect with prayers in the middle of the day while trying to live as normal and temptation-free a life he can at home with his loving parents.

On a regular afternoon of Atafeh and Shireen hanging out together, Mehran sees Shireen and is completely taken with her. Freaky CCTV cameras inside the house and all.

Though Circumstance is the typical LGBT film — in which two girls can’t be together because of certain, well… circumstances — the film turns semi-political midway through. The structure is a bit of  a mess — it doesn’t mix well together. First, we have this coming of age love story. Then there’s the family drama, the political side of things, and the stalker psychological thriller bit. The family drama is underdeveloped — we only learn a few things from Atafeh and Mehran’s parents and they don’t really matter to the plot.

We learn a bit about Iranian contemporary society, compliments of a quick run in with the moral police — including one after a dubbing session of Gus Van Sant’s Milk and a very funny dub session of a Samantha sex encounter in Sex and the City.

We never understand why Mehran would turn into the man he became, even turning on his old pals and parents, but he’s definitely the most interesting aspect of the film. You keep asking yourself “Why would he do that???” Yes, you can probably blame it on becoming ultra-religious, but that would be too simple.

As far as the relationship between Atafeh and Shireen, it doesn’t seem like the central part of the story. The film is called Circumstance, and that’s what the film is — a lot of bits and pieces making a whole. If you think too much about it, it starts to fall apart. But in the moment that you’re watching it, it’s quite engaging — almost like a telenovela.

People are going to be divided on it. For some there won’t be enough LGBT content — meaningful or smut, whatever your pick on LGBT content is. For others the political and cultural content will only scratching the surface. But as a whole, it works better than you would expect, especially with as bleak an ending as there was.

Circumstance is not a family drama, is not political, is not a romance between two girls in impossible circumstances who won’t make it through — it’s all of those. If you only like one of those aspects, you’ll never be satisfied with this film.