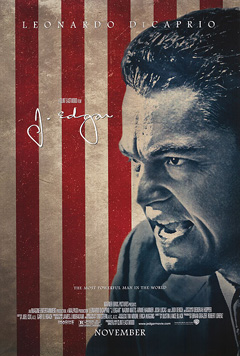 To be perfectly honest, I’ve been a little bored by every Clint Eastwood film that’s been released since Letters from Iwo Jima — Changeling, Gran Torino, Invictus, and Hereafter have all been duds, one duller than the following.

I really have no idea why the press (at least, down here) seems so keen in loving Clint Eastwood as if he’s the second coming. I’d be interested to see what they think about his cameos in that upcoming reality show with his daughter and wife on the fabulous E! Entertainment.

However, with the right cast, the screenwriter and the right subject, an interest may spark. So it did with J. Edgar. I mean, what couldn’t be interesting in the life of the person who set up the FBI — which, by the way, has always been under fire because the secret service is too secretive according to some — a man that had all the good intentions to make America better, but was corrupted with power.

Add to that Dustin Lance Black’s perspective of the man, someone who was so attached to his mother (Dench) that every single word she said, he wanted to achieve… or wanted to keep hidden from her, like his chemistry with Clyde Tolson (Hammer), who later becomes his right hand at everything Edgar Hoover did. The relationship between the two is kept at arm’s length by Hoover himself (and in the film), and it makes it a bit hard to connect with the both of them until the very end of the film.

Sometimes I think that Eastwood wanted to make a political drama (or a regular biopic) but Dustin Lance Black wanted to write a love story, and the result seems a bit of a disconnect for the audience. At points in J. Edgar, we’re looking into the life of the man trying to please his mother and find perfection at work, which includes meeting the best assistant EVER in Helen Gandy (Watts), and the next moment we’re looking at a man who gets flustered when a dashing man passes him a napkin.

If we have to compare this to another film, it could be compared to Black’s previous script for Milk. In contrast to J. Edgar, however, the story between the political man that was Harvey Milk and the man that he was in private seemed to flow without trying. Of course, another big distraction has to be the awful makeup applied on Leonardo DiCaprio to make him resemble Hoover, which pales in comparison to the work done on Meryl on The Iron Lady.

The best highlight in all of the movie, however (and I’m not trying to be ironic or anything), has to be the ending sequence when Hoover passes away and Tolson, Armie Hammer in old makeup, gets to him. After all they’ve been through, this is the most powerful moment for the couple — it is quiet and emotional without being overly dramatic.

In the end, J. Edgar seems like a biopic of a man put together from bits and pieces that can’t really connect to one another, making the experience of watching the film rather… forgettable.