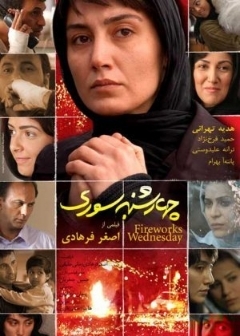 As they say, better late than never. Since the critical and commercial success of A Separation, which won the 2011 Academy Award for Best Foreign Language Film, and the Cannes-anointed Le Passé, two earlier Asghar Farhadi films have received theatrical distribution in the U.S.  Last year saw the release of the mesmerizing About Elly, and now we have Farhadi’s third feature, Fireworks Wednesday (Chaharshanbe suri), arguably his finest achievement outside of A Separation. I initially tracked down this film back in 2008 when, believe it or not, it went directly to home video. This despite the fact that it had been celebrated a couple of years earlier at the Chicago International Film Festival, among others. I was fortunate enough to have already seen Farhadi’s second effort, Beautiful City, which should be coming up next if this trend continues.

An up-to-the-minute report on the social codes and values of the Iranian middle-class, Fireworks Wednesday, as the title suggests, is set on the eve of the Persian New Year [1].  This is significant because, for a film that takes place almost entirely in and around an apartment complex, it is rather aurally intense, what with the constant cacophony of traffic, music and, especially, firecrackers and gunshots, which at times make it sound like a war movie. But then, in a sense it is. Besides the work of Lucrecia Martel, I haven’t come across many contemporary films that use off-screen sound as effectively as this one does.

It opens with a soon-to-be-married working class couple traveling on a motorcycle. In a sign of things to come, the young woman’s black chador [1] gets caught in the rear wheel of the vehicle. The traditional views held by this innocent, but not entirely naïve, individual (Alidoosti) soon clash with the more worldly and modern ways of her affluent employers (Farokhnezhad and Tehrani), a couple who might be on the outs. Their disheveled apartment serves as a potent metaphor for the situation they find themselves in. Although the space becomes difficult to navigate for the domestic help in more ways than one, this is among Farhadi’s more excitingly mobile efforts. Some may even be reminded of the Dardennes’ films given how much tension Farhadi is able to generate with his blocking, camerawork and editing.

To his credit, it doesn’t come at the expense of what this Iranian auteur is best known for: stories of moral and emotional complexities that transcend their immediate sociopolitical contexts by being honest and specific to their conditions. Farhadi, who co-wrote the well-calibrated screenplay with Mani Haghighi, deftly (and uncritically) navigates the psyches of his characters, none of whom are painted with broad, easy strokes. And while it’s not uncommon for Iranian films to be sympathetic to the plight of women in that patriarchal society, Fireworks Wednesday accomplishes the task with uncharacteristic sensitivity and insight.

As usual, Farhadi is aided by some terrific performances. Alidoosti, who’s already worked with Farhadi on three occasions (and will do so again in his next venture), serves as a perfect audience surrogate in the initial stages as she tries to gauge the situation she has unwittingly been forced into. She is not above taking advantage of it once she figures out its particulars. Farokhnezhad, the husband, and Bahram, the divorcée possibly involved with him, manage to make us care about their ostensibly less sympathetic characters. And Tehrani, arguably the soul of the film, is astonishing as the wife reduced to being a trembling, paranoid mess.