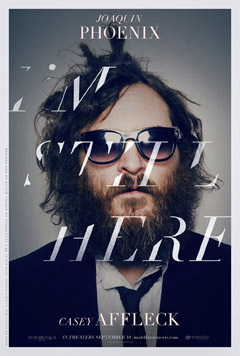 I’m Still Here is the big mockumentary of the year that was supposed to be kept a secret, but got found out long before it was even done. That is why I perhaps found myself overly hating this “documentary” while watching it, because I knew it was all fake. But afterwards, I found myself thinking: “well, aren’t all movies fake?” And had this been presented as a movie would I have loved it?

Thing is, be it a documentary, a mockumentary, a movie, a project or just a case of Affleck and Phoenix having too much time in their hands, well, screw me over: it was genius.

I know there has been a lot of hate and a lot of love being thrown towards I’m Still Here, and I must say that it is amazing. Not only is Phoenix, perhaps, doing one of the best roles in his life, but it pissed all over the way fame, power and money are used in Hollywood. It made fun of it all.

I’m Still Here also blurred the line between what is real and what is fake — what makes a movie a movie, and what doesn’t. Had this been a movie, then it would have been the tale of a douche-diva. Had it been a documentary, then it would follow the downfall of a star or show said star’s real persona. Whatever it is, it was good. As long as you remember not to take it that seriously.