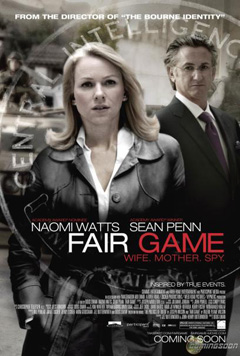 Fair Game is a political drama depicting the real-life scandal of Valerie Plane (Watts). The CIA agent has several undercover operations going on when her secret identity is revealed in a newspaper, in response to husband Joe Wilson’s (Penn) opinion article on the findings of Iraq’s weapons of mass destruction.

The film plays out like a wonderful drama. As people from her community turn hostile towards her and her family, her career and life as a common citizen begins to fall apart.

There is little thrill in this thriller, however. We never feel these people’s lives are in danger, though they probably were in real life. Whatever feeling of being trapped they had, it played more on the drama of how they were just screwed.

Naomi Watts plays Plane as a woman fully in charge of her life at work, handling several cases at a time and getting things done — or almost done, in the case of the last cases. Yet she’s vulnerably tough at home, where her husband seems to be in the loop of things, but out of it at the same time.

Penn gives us hints of wanting to play Wilson as a good guy, but his actions come off as insecurities, making a lot of the things going on tougher for his wife and family. He likes the attention a little too much, and seems to enjoy to add wood to the fire.

Fair Game is worth watching if you don’t get mad at political issues. If you think governments suck and take advantage of us, you’ll end up with an ulcer. If you think people that go against the governments suck, you can take a hike as well. Fair Game is a film for discussing the lives of real people, in which a lot of people on many sides of the story had a little to blame.