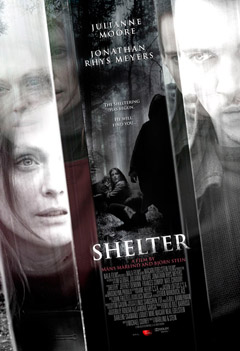 Shelter is a psychological thriller that tells the story of Dr. Cara Jessup, a forensic psychiatrist played reliably by Julianne Moore, who is trying to uncover the mystery of why Adam, her new patient, played by Jonathan Rhys Meyers, has multiple personalities that appear to be only murder victims.

As a viewer you quickly realize that Adam, or whatever personality Meyer’s character has adopted, is not a normal, harmless mental patient, and soon both Cara and her family are in danger.

Shelter starts off very well, and the two Swedish directors have done a great job in creating a creepy and scary atmosphere. Towards the end of the film, which is full of surprises, everything unravels while a struggle between life and death takes place. However, while we get to see the connection between Adam’s personalities, we lose a lot of the thrill and mystery that captures the viewer at the beginning.

Some things could have been left unseen or even unexplained, but overall it’s a good movie and I left the theater with a chill down my spine.