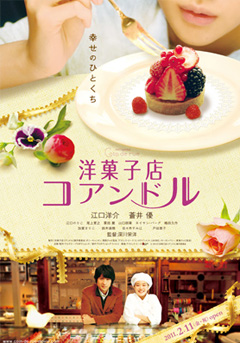 Before you start watching this movie, head over to your local pastry shop and get an order of your favorite desserts, as you won’t be able to stop salivating as you watch Yu Aoi master the arts of a grade-A patissier.

Patisserie Coin de Rue is the story of a Kagoshima girl — this is a point in the film, so it’s very important that you know that Yu Aoi learned Kagoshima dialect for the role. But leaving aside the delicacies of language, the film is about a girl who arrives to Tokyo in search of her boyfriend, Umi-kun (Hiroyuke Onoue), who was in the city, supposedly working for the famous Patisserie Coin de Rue pastry shop.

Natsume (Aoi) finds the pastry shop and the owners tell her Umi-kun was only there for a couple of days before he left to go god-knows-where. Without a place to stay or knowing anyone, Natsume asks for a job at the shop until she can find Umi-kun and return to Kagoshima with him. However, before she can become part of the renowned pastry shop, she must audition.

And she does… with a cake that doesn’t impress anyone — except for a lingering feeling from ex-master-patissier, Tomura (Y.Eguchi), who’s become a high-brow pastry critic. Leaving Natsume butthurt, boss Yuriko (Toda) gives her a gentle boot with a beautiful, creamy, smooth chocolate mousse, which opens Natsume’s taste buds to the fantastical flavors of pastry-making.

Patisserie Coin de Rue is very predictable, but expecting something cutting edge from a slow-paced comedy-drama — in which you know there’s going to be talk about death and a re-discovery of a passion — is asking too much. What this movie does is ask us to enjoy it for what it is. In it we enjoy pastry-making and experience the joy of savoring it, the happiness you get when the chemicals of this deliciously prepared food makes it to your brain.

Yosuke Eguchi might be billed alongside Yu Aoi on this one, but bitter Tomura is so devoid of anything that it is hard to connect with his story, even though he is supposed to be the anchor. It is Yu Aoi who brings in the warmth — that accent, which French pattisier mate, Julian (Nathan Berg), points out is hard to understand but sounds cute, and her outburst with tough Mariko (N. Eguchi) are hilarious. It is Yu Aoi holding this film together with whomever she has scenes.

If Yoshihiro Fukagawa had done a short film of Patisserie Coin de Rue instead of this segmented story — focusing solely on Natsume’s storyline and her choosing her job over her boyfriend — it would have been a perfect little short.

For those who have seen the film, why do you think Natsume left the car with her luggage?