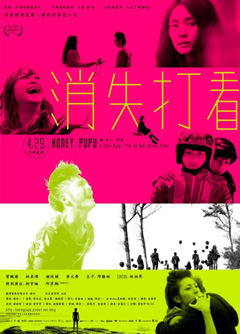 Director Hung-i Chen is back with some sort of experimental type of drama after his moderately successful short anthology of Candy Rain, this time around with a fresh batch of talent and a killer music score.

However, beware that to probably enjoy Honey PuPu to its fullest, you’d have to be remotely attached to the city of Taipei or you’ll be as lost as I was with it. Part web-based, part fantasy, part youth drama story, part music video [1], Honey PuPu tells the story of a group of young people who are obsessed with missing stuff, for which they all end up in the online community located on “missing.com”.

Soft-voice radio DJ Vicky (Tseng) has lost her boyfriend Dog (Lee). She literally has no idea where he might be, and she begins suspecting a certain wild girl called Playing (Hsieh) might be behind it all. In order to find her, she gets in touch with Cola (Chiu — a.k.a. Wang Zi from boyband JPM) who gets in touch with Assassin (Lin P.S), who introduces his girlfriend Money (Lin C.S) — Cheesebaby in the forums — to Cola who begins feeling a certain attraction towards her.

In their search for Dog, the group discovers facts and landmarks of the city that have already gone missing with time.

There is a whole lot of slow-paced waiting in this one, which definitely marks this as a non-commercial film. If you had previously enjoyed Hung-i Chen’s work [you can check a couple of his shorts on the Candy Rain YouTube channel] either on film or his music videos, you’ll probably like to know that Honey PuPu still has all the makings of a music video — unlike a film made by MTV.

Idol Wang Zi from JPM, who plays Cola, also sheds the idol image for an otaku look, that apparently was almost too much for him the first time on set. But the one that surprises and begs for your attention is Lin Chenshi — aka. Zai Zai. Her relationship with honeycombs, hexagons, boyfriend, Assassin, and suitor, Cola makes her the most relatable character in the whole story. We almost forget that we’re actually looking for Vicky’s lost boyfriend, Dog, as we begin looking for a freakishly old computer to read a floppy disk — a FLOPPY DISK!!! That was about the only thing remotely nostalgic I got from the film, not that I miss floppy disks or anything.

Making sense of Honey PuPu is pointless, not that it is a pointless film. But you gotta be the right kind of people to actually get all of it and not have any bit of it go over your head, and a lot did go over my head. Especially the storyline between Playing and Assassin — that was extra weird with a slight kinkiness to it.

However, that soundtrack! Hung-i Chen is mostly a music video director, so he works with music quite well. Honey PuPu gives you quite a bit of classical music queues — thanks to DJ Vicky — but there are also reminders of the Taiwanese music scene in a karaoke sequence and through the music our characters listen to.