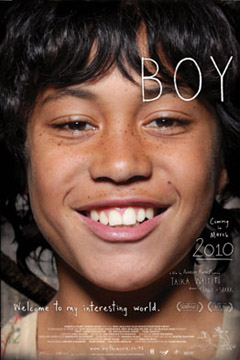 The children fend for themselves when their grandmother has to leave for a funeral. That is when Boy’s long-lost father returns, and with him all the hope Boy used to dream of him.

The film was cute, it was silly and it had amazing child actors. I am usually sceptical about movies with children as the leads, but this worked. Not only are we presented with the beauty that is New Zealand, but we are also given a glimpse as to how the society there used to be. I felt sorry for the kids, I felt sorry for the adults, but mostly I felt sorry for finding the film amusing when it really is kind of sad.

However, the way Boy is portrayed hides the sadness behind the hilarity. How can you be sad when you live in the beautiful New Zealand? Plus, Boy is not sad. He lives his life as best as he can, even when reality strikes him, he does not get sad. In that way this movie is heart-warming.