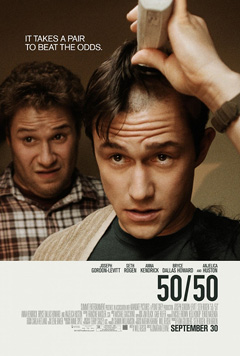 How funny can cancer be? We can ask Laura Linney’s The Big C.

50/50 isn’t really a comedy. You won’t be leaving the theater saying “Ha! Ha! That cancer is a hoot! My god, I wish I had cancer!” But the film manages to balance drama with a lot of light moments of tension.

The film starts with Adam (JGL) jogging around Vancouver, which is meant to represent Seattle — I’m sorry, I had to point that out because the film brought back so many memories. Adam is your healthy, twenty-something average guy — he doesn’t drink, he doesn’t smoke and he recycles. Goes to show you that being too good doesn’t always pay.

His best pal, Kyle (Rogen), on the other hand, drinks, smokes weed and spends his time pestering women to sleep with him. Typical Seth Rogen shtick.

Adam is feeling a little bit under the weather, so he gets himself checked. The doctor tells him he’s got some type of weird cancer in his spine. Because of his strained relationship with his mother, Diane (Huston), and his Alzheimer-ridden father, Richard (Serge Houde) — the stuff made for comedy gold, huh? — Adam reveals the bad news to his artist girlfriend, Rachael (Howard), hoping that she won’t bail on him because of this obstacle in their relationship.

The film’s tagline — “It takes a pair to beat the odds” — seems to suggest that 50/50 is a buddy film in which Adam, with the help of his best friend, must beat cancer — that or it could be talking about some cojones. But what really makes the film is Adam’s relationship with his mother. When we first meet Anjelica Huston’s character, she seems like your average overbearing mother and we understand why Adam might be pushing her away. It takes Anna Kendrick to tells us we are all pricks for thinking that, and that we have to understand why Adam’s mom acts the way she does.

Joseph Gordon-Levitt is his good acting self — I mean, has the guy ever sucked? His scene losing it in the car and the scene at the hospital are the film’s best scenes. The weakest link in 50/50 was Seth Rogen. I know people say he had range in this film… but he really didn’t. I mean, he did the same thing hees done in all his movies. There’s a scene where his character gets some depth, but Rogen isn’t even part of that scene. It’s all Gordon-Levitt there, Rogen is passed out on his couch.

Having said that, I did enjoy the film. Kyle calling Rachael out on her shenanigans was something a lot of people wish they could do, and I’m feeling a little bit sorry for Bryce Dallas Howard, who’s getting a lot of bitch parts on films — The Help. And that Doogie Howser reference with Anna Kendrick’s reaction as that zen but worrisome doctor was hilarious.

I think it’s pretty predictable that 50/50 is going to get a nomination for Best Comedy (which it isn’t, really) at the Globes, and that Joseph Gordon-Levitt is a shoo-in for Best Actor in a Comedy. Anjelica Huston’s nomination in a supporting category is tougher, but deserved.