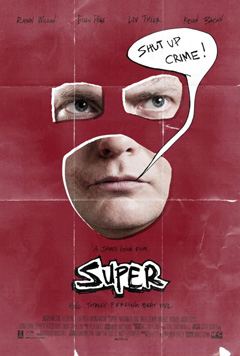 There’s a brand new batch of powerless superheroes in the making, or so it seems with Super, which puts Rainn Wilson and Ellen Page as the duo of The Crimson Bolt and Boltie.

However, unlike Kick-Ass which relayed a lot on its sarcastic tone mocking the superhero genre, stylized camera work, and an almost hero-worshippable Hit Girl, Super delivers the same — sans stylish camera work or worshipability — with a bittersweet tone.

The film tells the story of Frank (Wilson), a loser guy who wakes up every morning thinking about the two perfect things in his life: one, his marriage to his beautiful wife Sarah (Tyler). Two, that time he once helped a police officer catch a bad guy.

Frank notices Sarah isn’t as into him, and that he’s been losing her to her previous life of drugs. One day, a cocky guy named Jacques (Bacon) shows up asking for her — next thing he knows, Sarah is gone with all her stuff missing. Frank is driven into depression, but finds his new path as The Crimson Bolt.

Super is a comedy drama about people that pretend to be superheroes, that never becomes a superhero movie. There are no cool superheroes in this movies, just very delusional people. Wilson plays Frank quite convincingly, as a guy with serious problems that thinks God is sending him signs — showing him who are the demons, or pushing him to become The Crimson Bolt — Frank lives inside his head, and that is his problem when he decides to whack people on the head with a wrench.

On the other side of the spectrum, there’s Libby (Page), a fangirl who’s totally ecstatic about the prospect of being a superhero, so she puts herself forward to play The Crimson Bolt’s kid sidekick, Boltie. In the moment of action, Page’s Libby looks out of it and eager for more — which is hilarious — but shows how far she’s willing to go… for fun, which is disturbing. Her character does go too far in a rather awkward moment between Libby and Frank in costume that leads into the final battle.

Though all the characters seem underused, with Kevin Bacon playing the bad guy, Liv Tyler playing the wife that needs saving, Nathan Fillion in a cameo as The Holy Avenger, and Linda Cardellini’s one scene, Super is actually kind of lots of fun, even if looking back on it makes it seem like a very bittersweet film. It’s got better development for the main character, and it’s got a more believable ending that isn’t about living happily ever after.