Chronicles of Narnia: The Voyage of the Dawn Treader, The 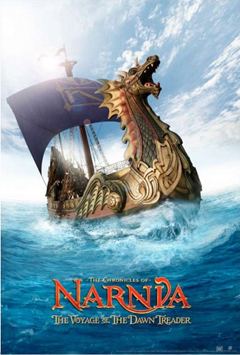 First, let me just say that when the trailer for Dawn Treader came out, I thought it looked terrible. The CGI work in the film looked positively subpar in comparison to what you thought of Lion and Caspian when they came out. I also wondered why I couldn’t remember any details regarding the book, since I’ve only read the series once. Except for the annoying cousin, I was blank.

The Voyage of the Dawn Treader tells the story of Edmund and Lucy Pevensie, who stayed over at their cousin Eustace’s place as they’re separated from their family… including Susan and Peter. Eustace is annoying, played very convincingly by Will Poulter (Son of Rambow). He’s loud, whiny, a complete pain. Then one day as the cousins are arguing in a room that includes a painting of a ship at sea, water starts dripping from the painting. The room fills with water, and they’re transported to Narnia.

Edmund, Lucy and Eustace — who’s freaking out by now — get rescued by Prince (now King) Caspian and his crew, plus Reepicheep, on board of the Dawn Treader in search for the seven allies of Caspian’s kingdom, who were betrayed by his uncle when he took power. Stopping in the first kingdom/island, they discovered a group that’s been taking people away to give them as offering to something known as “The Green Mist”.

Aslan’s totally against this Green Mist, so Caspian, the Pevensie bros, Eustace and company must trail the rest of the kingdom’s allies, get their swords together, and vanquish the Green Mist.

Looking at these no-longer kids makes me feel old. Lucy (Georgie Henley) is even more grown up than I remember from Caspian. Same thing for Edmund (Skandar Keynes). Peter (William Moseley) and Susan (Anna Popplewell), however, look ageless. At least they do in the film.

Because my expectations were low in regards to the CG and the conversion, I must say Dawn Treader delivers better than expected. The fakeness of the CG in the 2D trailers was lost in the 3D conversion, which made the picture darker and blurry. You can’t have crisp action, that defeats the purpose of action. Also, the shots used in the film work quite fine as “3D” shots, you could even believe they had thought in terms of 3D environment.

The problem with Dawn Treader, however, lies in that it’s pretty thin on story. Even in the book, it seemed to only work as an introduction to Eustace… maybe the reason why that’s all I remember about the actual book. The film also includes some very cringe-worthy dialogue, but maybe that’s an issue with the dubbing I had to watch.

But I did enjoy it. What the movie makes better than the book is that it fixes the pacing. There’s a lot of action going on while they’re on their way to search for the allies and their swords. They also make a great build-up for Reepicheep, despite the lack of screen-time he’s had in the movies, to give him a deserving send-off. Actually, it’s probably my favorite scene — despite the blatant Christianity always hitting me in the face in the series, I’m rather fond of how the series ended.

However, I wish they had done something more emotional with Lucy and Edmund’s Narnia farewell, because I felt Susan and Peter’s were much more serious, much more felt… after all, we won’t see Lucy and Edmund! We could see a glimpse of Ben Barns as Caspian in The Silver Chair, but not Keynes and Henley.

I hope they do make it to The Silver Chair and The Last Battle… even cooler if they make The Magician’s Nephew. I really REALLY hate The Horse and his Boy, though.