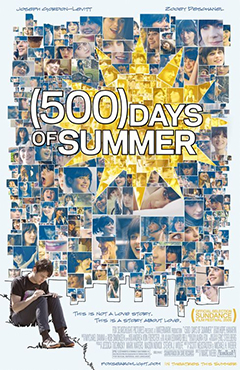 “This is a story of boy meets girl,” an omniscient narrator tells us as the film begins. Online or in person, a simple meeting is how every relationship starts — and that’s exactly what (500) Days of Summer is all about: a relationship. It’s one in a billion, but it’s one that people can easily relate to and as many have learned, not every relationship is your usual love story.

Marc Webb’s feature debut tells the tale of Tom Hansen, a young man who dreams of being an architect, and yet finds himself stuck working at a greeting card company. It is only when Summer Finn begins working at his office that his life seems to shift  into something a little more positive. While Summer may not believe in love, Tom finds himself falling hard for her from the moment they bond over a song by The Smiths. Starting from the end of their relationship, Tom recalls many of the times they had together in non-sequential order.

So rarely does a movie capture the curse of unrequited love so perfectly, so much so that this might just be the best one since Woody Allen’s Annie Hall. Whether it’s the Bergman references, Marc Webb’s use of split screen, or even the heavily flawed protagonist, who serves as a narrator of sorts, (500) Days of Summer has a lot to thank Woody Allen for. Many will take their chance to call it a rip-off of sorts, but writers Neudstadter and Weber understood the material they were working with — likely drawing from personal experiences to make this as down to earth as possible.

What’s really impressive about the writing in particular is the character of Tom. We meet him as a bitter man, choosing to only focus on the good times that he and his vision of Summer had. By naively falling in love with an idea rather than the real woman, he opens himself to a lot of pain. As we see the film mostly from his point of view, we are faced with the extremely unreliable perspective of a man with a broken heart.

Joseph Gordon-Levitt plays this love sick young man perfectly, from his highest to his lowest points. At his best, he dances — in what could be considered the happiest moment of the film — along to Hall & Oates’ You Make My Dreams. This scene showcases Webb’s talent as he brings his music video experience into play, while also crafting the only scene in the film in which the color blue is heavily featured that doesn’t involve Summer.  At his lowest, we have a wounded Tom writing a Valentine’s card that says, “Roses are red, violets are blue, fuck you whore.”

Zooey Deschanel shines just as brightly, molding herself to become the quirky girl that Tom thinks he loves while offering glimpses of the real Summer, the mature woman that Tom never took the time to understand. Her chemistry with Joseph Gordon-Levitt is overwhelming at times and Webb captures it in every scene that the two share together. The supporting cast offers a collection of characters meant mostly for comic relief, and in this they all definitely do their job, especially Chloë Grace Moretz and Clark Gregg, who deliver some of the best lines in their limited screen time.

All else aside, one of the biggest highlights of (500) Days of Summer is the music featured in the film, which accentuates what a terrific debut this is. Mychael Danna and Rob Simonsen’s subtle score offers a certain tenderness to emotional scenes between the characters, luring you in from the main title as the narrator begins establishing the tale. Aside from the score, the film makes prominent use of a stunning soundtrack compilation, providing a good contrast of fun and upbeat tracks like Doves’ There Goes The Fear against the subdued elegance of Simon & Garfunkel’s Bookends.

Many will find themselves brushing off (500) Days of Summer as a mediocre rom-com, but the truth is that Marc Webb’s debut film accurately captures the sheer stupidity that comes with falling for someone, even when they might not be the right one for you.