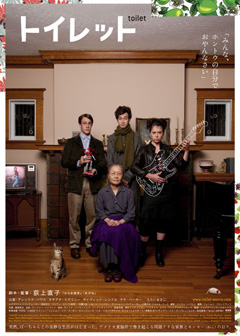 Toilets are important in Japan. They even have their own Wikipedia entry detailing on the finer characteristics of bottom toiletry. And who’s better to talk about toilets than Naoko Ogigami’s often dry humor, especially if it’s going to be at the hand of Masako Motai. I was wrong, not because these two aren’t a winning combination, but because there wasn’t enough of the two to make this a fun ride.

Humor is very particular, localized humor is even worse. Europeans tend to go for dark, Brits have “Brit humor,” people think there’s an “American humor,” Chinese have outrageous humor, Koreans like physical humor, and though the Japanese like their physical humor too, there’s no one quite like them for dry humor. Ogigami’s filmography is filled with it, often rendering her viewers to uncontrollable laughter that requires clapping, mouths agape and mute laughs, or they’ll find it the most boring piece of junk they’ve ever seen.

The bad thing is that Ogigami’s English debut, Toilet — or to avoid confusions, TOIRETTO — is possibly quite lost in translation. The story follows three siblings, the anal scientist Ray (House) who is a Gundam otaku, his agoraphobic brother Maury (Rendall), and the poet lover Lisa (Mastany). Their mother has just passed away, leaving them with their cat named sensei and their Bachan (Motai). Despite looking like the whitest kids in town, these people are — at least, a quarter full Japanese, so Japanese in fact that their passing mother only spoke Japanese to their grandmother. However, besides referring to their grandma as “bachan,” and calling on their cat, or talking about gyoza [1] and Lisa asking Ray to bring some ikura [1], they know no other word. Not even a passing “arigato” or a simple “kudasai.” Either no one in the production knows a thing about mixed-race homes or Ogigami is really pushing our suspension of disbelief in her casting.

After a random incident on Ray’s apartment building, he ends up back at home where he sees his grandmother every morning entering the bathroom, and always leaving with a huge sigh. Curious, he asks his siblings about it, but no one knows a thing.

Throughout the story, I kept on imagining Japanese actors in the roles, and it suddenly was slightly funnier. The humor, in a Canadian (or American) context, didn’t seem to fit. A lot of the moments, that seemed to be set for a dry punch, fell flat, like Maury’s reactions when his brother shut him down. Ray’s own characteristics seemed taken straight from those quirky Japanese characters, but in this cultural context, he just seems odd with no charm or warmth. Lisa is the only one that seems slightly in context with not being a Japanese character put into this non-Japanese context.

The story is mildly interesting, if you’re willing to see past those cultural issues. Maybe you’re not really familiar with Japanese comedies, so you might find Toilet charming, though it does veer into the “this is too quirky” whimsical zone of the independent cinema flare. Slow-paced and simply shot as is Ogigami’s style, Toilet may disappoint Ogigami’s fans, but it’s not a complete stinker.