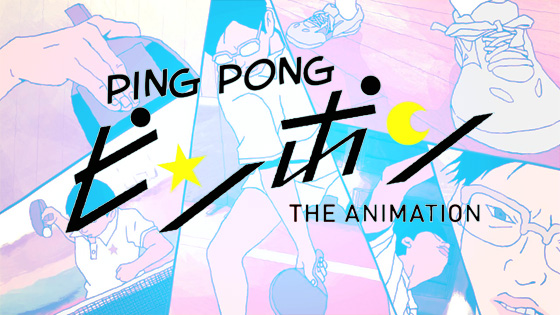 Taiyou Matsumoto’s Ping Pong manga series is taken off the pages once again — after it’s 2002 live action adaptation written by Kankuro Kudo — by none other than the soaring mind of animator Masaaki Yuasa in this dynamic hard-hitting 11-episode series of two high school friends and their love for table tennis.

Hoshino Yutaka (aka. Peco, voiced by Fukujurou Katayama) and Tsukimoto Makoto (aka. Smile, voiced by Koki Uchiyama) are two quite talented table tennis players at Katase High School who can’t be bothered to practice with the rest of the team, preferring to waste away fooling around, that is until an outcast transferred Chinese player called Kong Wengge (Yosei Bun) shows up, handing Peco’s bum in a platter. Ping Pong: The Animation chronicles the pitfalls of these two players as they discover that it’s not enough to be talented or just work your ass off to reach perfection, but there’s also the love of the game.

Though the animation style is Masaaki Yuasa’s own, it goes in stark contrast to his previous show The Tatami Galaxy (四畳半神話大系), which was 100% his. In here, he adapts himself to Matsumoto’s style and story following a more traditional arc of similar themes to Tekkonkinkreet. In fact, Peco is almost the perfect blend of Kuro and Shiro, though devoid of the darkest aspects of that manga.

Ping Pong: The Animation captures the dynamism of the sport, as it does the struggles of players finding their way to reach the top and the relationships forged throughout their journey. Even if we can identify Kong Wengge, and subsequently Kazama Ryuichi (aka. Dragon, voiced by Shunsuke Sakuya), as antagonists of the show, it’s great to see that they get their own character backgrounds and arcs despite the brevity of the story.

The star of the series, however, besides Taiyou Matsumoto’s artwork is obviously Masaaki Yuasa’s world-bending animation, as well as the striking art direction and split-screen editing to add thrills to all the ping pong scenes.

You can watch the series on Funimation [US], Hulu or CrunchyRoll.