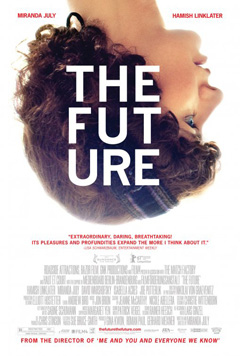 If I had a hyperbole quote for Miranda July’s The Future, it would be, “The depressing movie of the year.” Despite that, we are unable to feel a bit of sympathy towards these characters by the end of the movie, instead leaving — possibly — quite angry at them.

This comes as a huge disappointment after Miranda July’s 2005 success, Me and You and Everyone We Know. If you thought you’d enjoy this movie because you loved the former, you were qutite mistaken — boy are these two films polar opposites.

The Future tells the story of Sophie (July) and Jason (Linklater), a mid-30-something couple. Jason is a tech support guy who works from home while Sophie is a dance teacher who spends a little too much time watching videos on YouTube of people daring enough to dance for the world to see. Both of them thought they’d be something important by now and feel time ticking.

Sophie suggests they take the next step, deciding to adopt a dying cat. However, they are given one month before this adoption can happen, which makes them realize the best years of their lives are almost over because once you’re 40, you’re almost 50, and when you’re almost 50, there’s nothing really left.

Voiced by Miranda July herself, dying cat Paw-Paw narrates the slow story of his bleak future as Jason and Sophie get too wrapped up in their own lives to remember a promise they’ve made. Jason quits his job as a tech support guy and becomes a door-to-door tree salesman, duped into thinking he can make a difference.

Sophie, on the other hand, promises to record one original dance a day to post on YouTube. Almost haunted by her own creative block due to getting easily distracted by whatever is online, she befriends Marshall (Warshofsky) through a weird mystery call.

These characters’ lives are so unfulfilling — working in what seem to be pretty crappy jobs. Yet they live surrounded by pretty Apple products, giving them the luxury to quit their jobs and worry about the ethereal achievement of happiness. It might be too late for July to escape hipster status by now.

But I’m angry at the film. It started out organically. Young people who aren’t all that young anymore and who thought they’d be someone, or something, important. It’s all US. I thought I’d be rich by now. I thought I’d win an Oscar. We all grow up and have dreams crushed, but we don’t all quit our day jobs to sell trees. In the end, The Future is just a sad cat movie. Poor Paw-Paw paid the price of these characters with obscenely short attention spans, and I’m not even a pet person.

Is The Future a really awful film? No. It just might be one of those films you only watch one time in your life… so watch at your own risk.