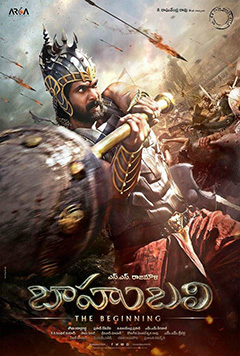 It took nearly a year for Baahubali: The Beginning to make it all the way to my part of the world— touted as the biggest production ($18M USD) in the history of Indian cinema (where the average semi-commercial production ranges between $3-8M USD), it broke a lot of records for the industry. It even managed to crack the Top10 at the American BoxOffice on its opening weekend [1], even though a year later it seemed to fickle in the other international markets where it’s been opening [1].

I still believe timing and immediacy is everything when opening a movie. Baahubali — and the grandeur entertainment of S.S. Rajamouli — missed its initial buzz then. My affair with Telugu cinema isn’t the best, it’s probably the one regional cinema I’ve had less success with. However, my relationship with what I’ve seen from Rajamouli has been its only salvation… Magadheera [1], Eega; I enjoyed them both.

Baahubali: The Beginning, as its subtitle indicates, tells the origin story of a young man named Shiva (Prabhas), who survived an attack in the ancient kingdom of Mahishmati, when his mother the Queen (Krishnan) managed to save his life by sacrificing hers. Adopted by a couple of local villagers, Shiva grows up strong thinking he’s their child, and obsessed with the waterfall that his biological mother died pointing at. What follows is, of course, a tale of revenge, honor and bravery sprinkled with majestic visuals, musical numbers, epic battles and beautiful scenes of decapitations, only the way Rajamouli can do.

The film on itself is a typical masala in that there’s a wholesome hero who must defeat great evils, and there’s a heroine that becomes a muse [in number Dheevara [Spoilery MV]] to inspire and let the hero overcome the great waterfall that hides his kingdom. This mysterious muse turns out to be Avanthika (Tamannaah), a rebellious warrior from a group opposing King Bhallala Deva (Daggubati), who has kidnapped their Queen, Maharani Devasena (Shetty). All of it works as a build-up to the last 30 minutes which is all a massive battle— a cross between Lord of the Rings, 300 and Red Cliff (赤壁); which is magnificent as it is entertaining.

Sadly, the movie is barely 2hrs30min with credits included, which means you’re left not knowing what happens. The second part, Baahubali: The Conclusion is already halfway through production, almost doubling up its budget, hinting at the possibility of being the first VR movie [1]. I can’t wait. April 2017 can’t come soon enough.

You can check out the complete Telugu Jukebox or the Tamil Jukebox on the Lahari Music T-Series channel, or the Hindi Jukebox on Zee Music Company.