How to Train your Dragon 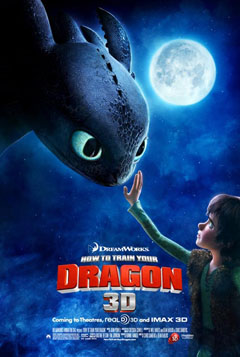 After so many years of watching animated films, it feels like Dreamworks has found their winning formula of cheap thrills and decent box office numbers, and they’re sticking with it. Time and time again, they put out a piece with similar jokes, running gags, and uninspiring character design with little heart.

Their latest animated adventure, How to Train your Dragon, tells the story of Hiccup, a geeky very un-viking boy from a Viking village who wants to slay dragons, but can’t because he lacks all the physical attributes that a hunting Viking possesses. One day, Hiccup gets to meet an unusual dragon, whom he names Toothless, that will challenge all the knowledge that his people have of these creatures.

Dragon is a solid entertaining piece with thrilling uses of 3D, exciting action-packed sequences and some really nice textures. Its story isn’t bad either; however, it lacks certain qualities that make other animated films classics.

The main character, Hiccup (voiced by forever-geeky Jay Baruchel) is your typical good-hearted boyish hero. Though, at times, he gets on my nerves for all the unnecessary clumsiness [think Susan on Desperate Housewives], Hiccup has good intentions and never means to do anything bad. His dragon companion Toothless  is a very slick salamander-like dragon that, at times, acts like Stitch (obviously from the involvement of  Chris Sanders) from Lilo & Stitch.

That’s the things about Dreamworks animated films, and many of the latest animated films coming out… it seems, month after month – they don’t really hold up to repeat viewings.

Also, the Spanish dub seems funnier than the original English version. Case and point – Toothless becomes Chimuelo. You know you’ve got a problem with your script and/or voice actors when your dubbing has more spark.