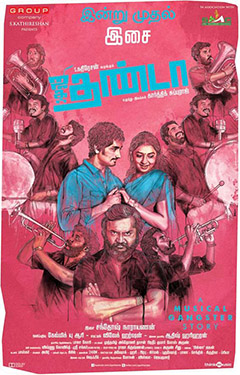 It’s been proven once again that I’m a Kollywood over Tollywood type of person. I’ve only seen about two dozen of them, but I’ve had a greater success rate than the latter, so I think I’ll eventually dive in deeper. Suggest your best Tamil movies away~

Anyway, Jigarthanda (translated to Cold Heart, though if you do an image search, it’s a Tamilian summer drink) came into my life due to some of its magenta and cyan stunning posters, and the recommendation of a few online film reviewers who voted it rather highly. While online voting of Indian films can raise and eyebrow or two, I was honestly surprised at how much I ended up enjoying this one.

The magenta and cyan posters are topped off with the slogan “a gangster musical,” which obviously means that one has to give it a try. The story revolves around filmmaker hopeful Karthik (see what they did there, played by Siddharth), who’s just come out of a film-making reality show where his last short took a beating from a serious film director (Nasser in a cameo). However, Karthik is backed by movie producer Sundar (Naren) who promises to turn him into a feature film director just to spite his bitter director reality show nemesis.

Not knowing that he can’t make empty promises on television, Sundar isn’t interested in social movies, but asks Karthik to write (or rip-off) something along the lines of The Godfather, Scarface or anything that has bloodshed a la Tarantino. With that in mind, Karthik decides to investigate one of the craziest psychopath of southern India- “Assault” Sethu (Simhaa), infamous for crushing his turf opponents and setting ablaze journalists who’d dare to investigate the truth about him. Staying over his friend Oorni (Karunakaran), they’ll try to befriend Sethu’s colorful gangster inner-circle to try to get pivotal information on this violent character.

While I think Jigarthanda is set for a slow start with little empathy towards Siddharth’s character or his struggles as a filmmaker, the story picks up steam and spice nearing the Intermission, when it starts getting into the twists and turns of his plan going awry. The most comedic undertones of the first half shoot up in the second when we get to see more of the interaction between hopeful storyteller and goons. The only sub-plot I thought wasn’t written in as smoothly was the mandatory romantic angle, which does ended up having a certain effect for the final arc in the story, but added a good 10min. of song [1], despite the often fresh jazzy-vibe-inspired score by Santhosh Narayanan [1]. Though, I was surprised when both Siddharth’s and Lakshmi Menon’s characters confess to each other that they’re not like the heroes or heroines in movies willing to do everything for the one they love.

The highlight of the whole thing is, of course, Simhaa who gets to be as vicious as he was funny or endearing, playing the most badass of thugs whose thirst for respect was so great, he was willing to beat anyone who’d dare to mock him. I would’ve liked to see a bit more build up in the relationship with his mother, though.

This just falls short of a 4-star rating. Definitely recommended.