The Universality of Music: A SXSW Interview with WYM

As a music lover, there’s sincerely nothing more rewarding than sharing that same love and passion with someone. In this case, I was given the ultimate pleasure of sitting down with Byun Jun-hyung, who goes by Bjorn, and who most fans of electronica will know by WYM. He first made his presence known as part of duo MDS, then crashed onto the scene as a sort of new-age one-man band under the moniker WYM in 2014 with his debut After Moon, an album that mixes the flash and pop of electronica with heavy doses of funk and soul. The album garnered him a nomination for Best Electronic/Dance Album of the year at last year’s Korean Music Awards, and has earned him recognition in the electronica community as a premier artist and producer.

Going in, I’ll admit I was a bit nervous. I actually wasn’t meant to interview him until the next day, but given the opportunity, we decided to have an impromptu interview right then and there. So as my second interview of the day (following my chat with traditional-rock fusion band Jambinai), my nerves started to pop. Turns out I needn’t have worried. He was kind and patient, even sharing a laugh with me and RockNSeoul’s Rebecca Cronan about the highs and lows of relying on your phone for everything.

He introduces himself with a smile, “My name is WYM from South Korea, and I do a lot of electronic music.” I was constantly surprised that first day with just how laid-back everyone seemed to be, answering my questions as if we were two people chatting over lunch instead of artist and interviewer. When I ask him how it felt to be in Texas for SXSW, he answers casually, “It’s my first time in Austin, not first time in the States, but first time in Austin. The weather is great (Camiele: You like it?) It’s a little hot, but before coming to Austin I was in San Francisco (the week before SXSW). It was rainy all weekend, so it was pretty bad. Last time I was in San Francisco was last October, and at the time the weather was really great. I could go out and walk around and go sightseeing, but I couldn’t do it this time.” No wonder he was so excited about the weather. Having arrived the night before, however, he hadn’t gotten a chance to do any sightseeing yet, but he was still excited about the sun and Austin’s welcome warmth.

What was intended as a very basic question became the jumping point for a slight shift in conversation. When asked who influenced him to start making music, it definitely threw my for a loop when he plopped Tupac on the table! “It’s a really weird root of my listening,” he says with a chuckle. He continues, “I got into music while listening to gangsta rap: Tupac, Warren G, all those West Coast G-funk era.” Then Rebecca decides to play a little Devil’s Advocate, stating she was more into East Coast hip-hop, the rivalry between the two schools of thought butting heads ever since the West Coast decided to join the game. For WYM, however, “East Coast was too stiff for me.” Gauntlet thrown! He continues, “The groove was too stiff. I think West Coast has more groove. They sampled a lot of ’70s funk music.” Well… he’s not wrong.

But as shocking as that revelation, it doesn’t quite explain the jump to electronica. It turns out he did his homework, seeking out the roots of hip-hop from the West Coast and immersing himself: “From Tupac, I started listening to ’70s soul and funk, so I got into Marvin Gaye, D’angelo….” Needless to say I kind of freaked out. It’s not so much unexpected that someone with a love of hip-hop would seek out the foundation, but I just wasn’t ready for that kind of intrinsic knowledge from an electronica musician from South Korea. He goes on to say, “I was really a rap/hip-hop/soul kid and teenager. That brought me to the disco era. And then I got into a little house and electronic music, and now I am here.” That’s quite a journey, one that speaks to his musicality and certainly gives credence to the respect he has in the electronica community. 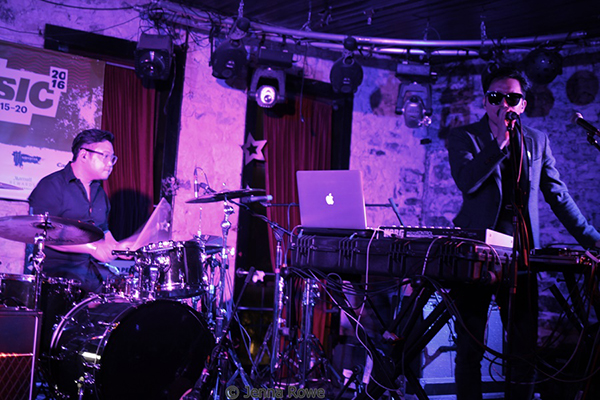 That being said, funk and soul don’t quite make one choose electronica in particular as the platform for their expression. So we dug a little deeper into his musicology. Who turned his eye to the buzz and warble of this house subgenre? “He’s not really electronic, but Jamiroquai.” Again, I had another freak-out moment, because come on, folks! I had worshiped Earth, Wind & Fire as the ultimate band growing up, but then Jamiroquai opened my mind to the world of Rare Grooves and acid jazz.

Then he slaps me in the face with Miguel Migs, and I instantly just lose the plot. If you’re looking for a way to get my attention, digging inside my soul’s musical library will definitely earn you brownie points.

On the backs of legends and with their influence forefront in one’s mind, stepping into the studio for the first time and gearing up to create something that will instantly find itself in the catalog alongside those artists you love is truly thrilling. However, WYM confesses his first experience wasn’t exactly that great: “Really first time? I felt bad! I didn’t like that.” He continues, “I thought the song wasn’t good. The track wasn’t good enough. The musicians that I got inspired by, they have great music. I want to make music just like that, that I got inspired from. And I couldn’t do it at the time.” He reveals it took him about ten years from when he started creating music (when he was about sixteen) to when he really felt he’d created something he could be proud to put his name on. Rebecca comments he seems to be a bit of a perfections, to which he can only chuckle and say, “Yeah, a little bit.”