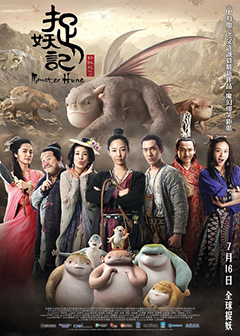 Monster Hunt, officially now known as China’s biggest movie of all time, making over $350M USD [1], until a new record is established this year… or the next summer season. It took Transformers: Age of Extinction to get past Avatar, but this 2015 (that isn’t over yet) has seen three other titles reaching for the stars: Jurassic World, Avengers: Age of Ultron, and Furious 7; and two of those had Chinese money backing and made a buckload of money worldwide.

With such hunger for Hollywood-styled blockbusters, it’s no surprise Dreamworks alumni Raman Hui (Shrek the Third is his fault) hit all the right spots for a fantasy family action comedy adventure with an edge- Monster Hunt is cute, funny, heartfelt and packs a punch that you rarely find in sanitized animated fights.

The film is a little complicated with its setup for children with narration on kingdoms and ministers that want to topple other kingdoms from within, and it all results in the Monster Royal Family been killed, so the Monster Queen is fleeing for her life and finds the heir of a Monster Hunter who’s grown up as the mayor of this tiny village called Tian Yin (Jing), who gets magically impregnated by the Monster Queen who must save her baby Prince. Tian Yin is being watched over monsters Zhu Gao (Tsang) and Pang Ying (Ng), so he is escorted by Monster Hunter Xiaolan (Bai), who really just wants to make a quick buck.

Tian Yin has all the makings of a Dreamworks hero; he’s an orphan, abandoned by his father and lives with his -mostly- Alzheimer-ridden Nai Nai (Elaine Jin). He also favors cooking and sewing over the family business of monster-hunting, and has a crippled leg. He actually becomes a sort of damsel in distress, until Xiaolan saves him with her wuxia. This mismatch of personalities make their road loads of fun with a heavily-pregnant doofus and his cool-looking and practical (but not as apt) monster bodyguard, and that follows through when these two become parents of that little turnip.

The film’s visuals are impressive, avoiding the hyper-realism of the West use of CGI on film and siding towards the likes of Takashi Murakami’s Jellyfish Eyes, but slicker and cuter at the same time. Monster design isn’t as varied, as most of them share characteristics — many are different sizes blobs with tiny eyes of different pastel colors — and have a distinct vegetable/fruit-like aura, possibly for a reason explored in the last arc.

There’s monster language- there’s a song with tiny monsters in that [Xiami MV][YouTube], as well as a regular song for emotional punch that could’ve been cut out or edited differently, because the biggest emotional scene comes at the expense of Tian Yin’s relationship with his own father, revisited on a flashback and mirrored in his relationship with the little turnip, known later on as Huba (Zhou Pingrui). It even goes beyond exploring Po’s relationship with his adoptive father Mr. Ping, especially for children whose parents left them behind with other relatives for reasons that they yet might not understand.

For being a family film, Monster Hunt runs a bit long, at 2hrs. with credits, and though the inclusion of characters as Tang Wei’s were hilarious as the Mahjong lady with the underground monster meat business- it immediately makes you think “Of course Chinese people eat monsters.” The plot point could’ve been introduced with less minutes, and still drive that point about not eating strange meats for medicinal/magical purposes, which even I as a meat-eater, could have fun and approve.