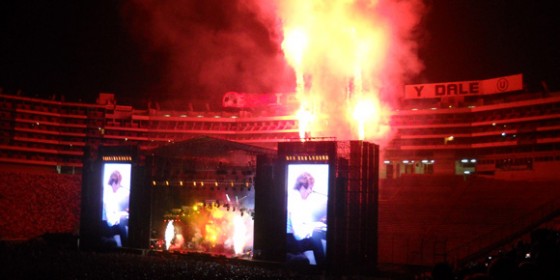 For years, many Peruvians thought it was literally impossible to see Paul McCartney performing here. However, during the past few years, Peru has become a usual stop for big tours. As far as 2011 goes, Lima has already seen the likes of Ozzy Osbourne, Mötorhead, Shakira, Train, Sting, Miley Cyrus, Paramore and others. Without a doubt, Paul McCartney’s concert held at the Monumental Stadium would be, by far, the biggest concert of 2011 around here.

The show started at 9:30pm. No opening act for Macca here, but different cover songs from The Beatles played across the stadium, including Guianko’s cover of Can’t Buy Me Love and a really good chill out version of Day Tripper. I thought of this as a way to either pump up the crowd in anticipation for Macca’s first show in Lima ever, or maybe piss off some people since they paid their hard-earned cash to see the real deal and not hear covers hours before the concert. At most concerts, the background music is not from the main act at all, but this was a first for me to hear McCartney-related songs before he appeared. I didn’t mind it and it didn’t interfere with my enjoyment of the concert at all.

And then people went wild for Macca. Great choice of using Hello, Goodbye to open the show. And then he followed it with Jet (Wings) and he nearly made me cry out of joy. I had in my mind the idea that the concert would be really awesome, but McCartney surpassed my expectations by a long shot. Juan was obviously right in telling me that I would really love the concert.

The setlist was mostly Beatles songs, but it also included his solo work, and Wings songs as well. At his age, he can still perform very well with many instruments during the concert, making it seem like he could have lasted longer than 3 hours playing if he wanted to. Highlights from the show includes Macca dedicatiing Here Today to John Lennon, as well as Something to George Harrison, the drummer dancing to Dance Tonight was funny, Paul talking in Spanish and pandering to the crowd who ate up all his words enjoying every moment of the concert. Highest emotional point of the night was easily hearing Let It Be, Live and Let Die (pyros included) and Hey Jude live in sequence.

All I can say is that if you like Paul McCartney or The Beatles, and you have the chance to attend his concert, do it. You won’t regret it at all. The only downside to the McCartney concert in Lima was the ticket prices. Granted that it is an ex-Beatle performing, but paying for any kind of ticket – prices were around the US $100-700 range – makes you feel like you also paid to give head to the people in charge of bringing McCartney. The price for the tickets also explained to me why the concert didn’t had full attendance (a couple of holes could be seen inside the stadium), despite nearly 47-50k persons attending the show.

Nonetheless, it was such an amazing experience for me to see Macca live.