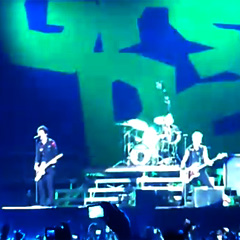 I’ve always liked Green Day, and I’ve always heard that they actually put up really awesome concerts. So when it was announced that they would be playing in Lima, I bought my ticket and woke up when September ended to see them rock the place up.

Around 8pm, rockabilly band Vaselina played as the opening band. At best, they got apathy and a few laughs or a very minor reaction from the crowd. Ten minutes before the concert began, the Drunk Pink Bunny appeared when Michael Jackson’s Don’t Stop ‘Til You Get Enough played in the stadium as background music, who then danced to Village People’s YMCA. That was actually funnier, more entertaining and more interesting than Vaselina, drawing a nice crowd-reaction. Shortly after the bunny left the stage, it was concert time. Green Day kicked off with the first three songs from the 21st Century Breakdown album, plus East Jesus Nowhere and Holiday. Things got much better as the concert progressed.

Crowd attendance-wise was big, but didn’t really fill the stadium. Metallica had a bigger audience in the UNMSM stadium. The fans, all ages – families, punk, emos, etc. Some were old-school fans, but most seemed to be “radio hits fans” as well as fans who started to like the band because of their last two albums, or the Rock Band game.

I should tell everyone reading this; Billie Joe Armstong is easily the greatest showman I’ve ever seen in a live concert (for now). The man shows loads of energy and passion when he plays his songs and really makes you feel like wanting to celebrate and have a great time.

As for highlights of the concert, I can tell you that some of the spots here were pretty much the same as in other Green Day concerts from the 21st Century Breakdown tour – fans singing Longview, exorcism spot during East Jesus Nowhere, covers, etc. However, the biggest standout moment from the entire concert, in my opinion, would be when they played American Idiot. Billie began to snap throughout the song.

Too bad for those who paid the expensive tickets (G zone) since they couldn’t jump around like crazy and celebrate like BJA wanted to because many assholes spent most of the concert standing and filming it, which wasn’t a exciting sight to observe. But in the E zone, there was a mosh pit that grew throughout the concert and peaked big during American Idiot and Jesus of Suburbia. It was cool.

As for the setlist, it was actually great and seemed pretty balanced, despite American Idiot having the most songs played. Top 5 Songs that got most of the crowd singing were Basket Case, Boulevard of Broken Dreams, American Idiot, Wake Me Up When September Ends and 21 Guns. All in all, amazing concert. Green Day is really one of those bands you might want to see live before you die.