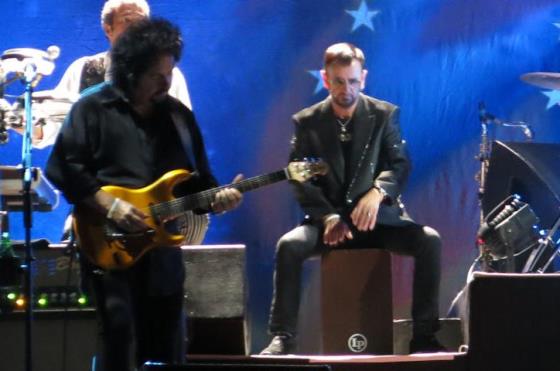 When I came back home after seeing Ringo Starr And His All-Starr Band live at the Jockey Club del Perú venue last Monday, my mom asked me if Ringo Starr actually played the Peruvian cajón. I asked her how did she knew about it and her answer was that Radio Mágica 88.3 FM (the only radio she listens) announced that Ringo would play the peruvian instrument days before the concert happened. You see, if I actually paid more attention to Peruvian news I wouldn’t have been surprised by Ringo when he played the cajón during You Are Mine. However, it was still a very nice visual.

I actually bought my ticket hours before the concert took place. I’m not much of a Ringo Starr fan by any means, but considering I’ve seen Paul McCartney live two years ago, a last-minute statistic-Beatles-driven decision and a conversation with a co-worker regarding the musicians involved got me into attending the show. It wasn’t just Ringo being there, but I also got to see Steve Lukather (Toto), Richard Page (Mr. Mister), Gregg Rolie (Santana), Todd Rundgren, Mark Rivera y Gregg Bissonette performing old rock hits as well as Beatles and Ringo’s songs live.

They all were clearly far superior musicians than Ringo himself (who alternated between singing and drumming during the show) and the covers from Santana and Toto sounded fun live. By the way, this concert reminded me that I should go and see Carlos Santana live someday before he retires. Despite the talented bunch of musicians, it was the ex-Beatle who drew the strongest reactions of the night from an nostalgia-hungry crowd with his Beatles songs. Highlights included the previously mentioned use of the Peruvian cajón during You Are Mine, Yellow Submarine (the entire crowd sang and a good portion of the front rows waved white and yellow balloons), Black Magic Woman, Africa and pretty much all the Beatles songs, especially the last two songs which lead to a strong ending.

Barring a couple of flaws — one of them was the uneven drumming sound between Bissonette and Starr’s durms and the other one involved an issue with Ringo forgetting (not sure if legitimate or on purpose) to play Don’t Pass Me By on the piano, which led to a Justin Bieber joke towards Ringo after the song — the concert was mostly good and Ringo stood out because of his charisma, sense of humor and showman skills when he talked to the crowd. He may not be the most talented drummer out there in spite of his Beatles status, but he succeeded big time in making the crowd have a good time and successfully promoting his “peace and love” motto, especially during Anthem and John Lennon’s Give Peace A Chance.