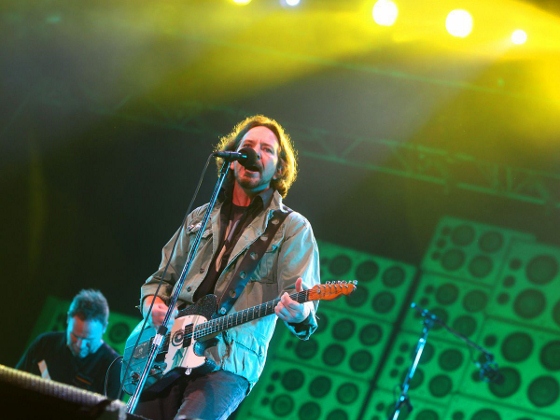 Pearl Jam’s first-ever concert held in Lima, Peru at the San Marcos stadium might be easily one of the top contenders for concert of the year around here.

To kick things off, American punk band X played at 8pm. Songs they played included Los Angeles, Who You Know and a cover of The Doors’ Soul Kitchen. The highlight of X’s performance was when Pearl Jam frontman, Eddie Vedder — yes, you read right — showed up on stage earlier than expected and sang Devil Doll with X’s Exene Cervenka (Viggo Mortensen’s ex-wife) to close the opening act’s performance. Vedder’s appearance actually woke up the crowd, who didn’t care much for X after four songs, and the crowd’s excitement and expectations to see Pearl Jam increased astronomically.

The crowd went batshit crazy earlier on when Pearl Jam hit the stage around 9:17 pm. Corduroy made everyone excited, singing and juming around, pushing anything in sight and even some fans — myself included — were pretty close to getting asphyxiated thanks to the back and forth pushing around and the smell of weed. Shortly after Do The Evolution, Vedder himself told the crowd in the first rows to take care of themselves and enjoy the show. And when Eddie says something, you obey, no questions asked.

The rest of the concert flowed smoothly thanks to a great setlist, as the band continued to play songs from Backspacer, Yield and Vitalogy, as well as classics from Ten and Vs. Even covers from The Who, Wayne Cocran — most Peruvians would be reminded of The Doltons for Last Kiss — and The Ramones were played during the concert.

Despite Eddie Vedder being one of the greatest showman I’ve seen live, Mike McCready stole the show with his amazing guitar skills and seemed to embrace the Peruvian crowd more than the rest of the band; he fell in love with the ceviche and spent the morning surfing before the concert took place. [1]

And while I really enjoyed hearing songs like Elderly Woman Behind The Counter In A Small Town, Unthought Known, The Fixer, Alive and Better Man live, I have to admit that one of the show’s biggest highlights was a romantic moment with Eddie dedicating Just Breathe to a recently married couple from their production team, who were on their honeymoon and sat on stage while the song lasted. [1]

Really great concert, whose only setbacks were watching parts of the crowd overuse their cameras as if their lives depended on it and most importanly, an unnecessary extra barricade near the stage that made the concert kind of dangerous earlier on thanks to the fast paced songs until Eddie calmed the crowds down.

Pearl Jam will tour around Costa Rica and Mexico soon. For more information, check out the band’s website.