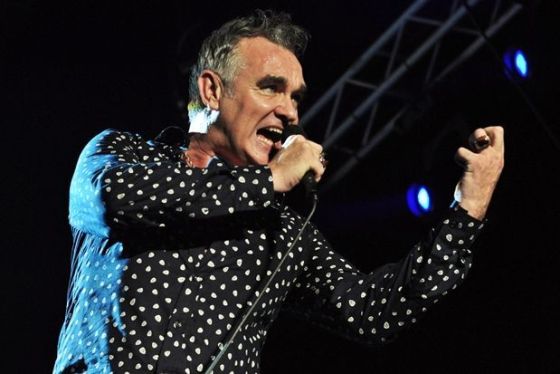 After Morrissey’s concert ended, I was more than just happy to have seen him play live in front of my eyes. However, my mind was also thinking about the horrible organization surrounding the concert from start to finish, and even post-show as well. But that’s another topic I’d talk about in detail later.

Just one day after Joe Cocker played live at the Jockey Club, it was Morrissey’s turn in the same venue to delight the Peruvian music lovers. The anticipation to see him perform live for the first time in Lima was very high and the ex-Smiths vocalist not only delivered, he was actually grateful to play in frony of 10,000 Peruvians and ended up leaving many of his fans fascinated — myself included — and wanting to see more of him again.

Before Mozz played live, American singer Kristeen Young served as the opening act. Most opening acts, regardless of nationality and talent, tend to get ignored or received with apathy by Peruvians. However, Young proved to be a great singer as she managed to captivate the crowd successfully and delighted them. She even shared a funny story about answering her emails naked at her hotel room only to be surprised by a window washer cleaning her  window. She’s got charisma and good stage presence. I’ll try and check out some of her stuff later on.

After Young, we were treated to music videos featuring Morrissey’s favorite performers (Brigitte Bardot, Sparks, Dolls, etc.). Around 9:05 PM, the man himself appeared with his band on stage — guitarist Boz Boorer dressed in drag and the rest semi-naked in small yellow shorts — and kicked things off with First of the Gang to Die. Fans were singing, jumping, screaming. Things started out great, and it would only get better later on.

Morrissey’s repertoire consisted of songs from his solo career and a few Smiths songs as well. While the setlist is nearly identical to the ones he performed in Belo Horizonte, Rio de Janeiro and São Paulo a few days ago, he exclusively performed Sheila Take a Bow — The Smiths song from their album Louder Than Bombs — for Peru.

Everyday is Like Sunday had everyone singing while Speedway had everyone in awe of the wall of sound created by the band’s instruments. Meat is Murder was the concert’s propaganda moment, music video included [1], since Mozz is pro-vegetarian. The show’s best moment was hearing Let Me Kiss You and There Is a Light That Never Goes Out one after the other. One Day Goodbye Will Be Farewell was fitting to close the show in a great note.

Overall, hearing Morrissey live was an amazing experience. He’s an amazing showman who has preserved his singing voice at the age of 52, something not everyone does very well after many years.

Morrissey concludes his South America Tour in Colombia on March 17. Later, he will tour around Asia. Fore more information about the Asia tour, look here.