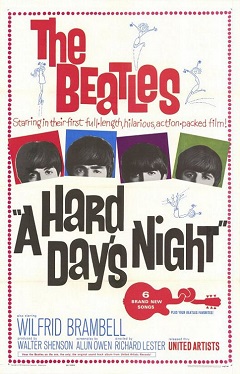 Let’s start this off with a pretty criminal confession: I haven’t seen the first ever Beatles feature film in its entirety until just recently despite seeing half of them live on stage (McCartney & Starr). Currently, UVK Multicines is screening A Hard Day’s Night in some of their cinemas and it’s a really nice chance for anyone to experience watching The Beatles on the big screen. For those who live in Lima, you’ll be seeing the 2014 digital restoration done by The Criterion Collection, which was done last year just in time for the 50th anniversary of the film’s world premiere.

As far as the film’s plot is concerned, A Hard Day’s Night pretty much showcases what it is life for the Liverpool guys, whom travel from Liverpool to London for a live televised performance. Along the way, however, the band and their managers Norm (Rossington) and Shake (Junkin) also have to take care of Paul’s grandfather John (Brambell), the latter being a troublemaker for everyone surrounding him.

As you would expect from a film that is centered around a musician/singer or a band, their songs are also played.

Reporter: How did you find America?
John: Turned left at Greenland.

While the plot seems pretty simple in regards to A Hard Day’s Night, the film itself proves pretty interesting and fun to watch in terms of seeing all the guys being pretty laidback, as well as showing the Beatlemania phenomenon in satiric fashion — the energetic and iconic opening scene with the title’s song and seeing lots of screaming fans chasing the boys as they make their way into the train station is a nice sample as well as the final scenes — and how the guys handle fame, most notably with themes of confinement against freedom as well as answering press questions, dealing with their managers’ orders and more. Owen’s script provided silly humor and several one-liners for the guys, the latter being a smart move since musicians aren’t generally well-known for having great acting skills, yet The Beatles looked naturally great and crisp on the screen in their acting debut (Ringo in particular stands out better) thanks to Richard Lester’s direction, who makes the film really fun to watch despite its simplicity in characters and plot, which is compensated with its great comic timing.

Other interesting observations to make in regards to A Hard Day’s Night is setting the template for teen-girl hysteria and displaying the concept of music videos before they became a normal thing in present day: a clear example of this is the segment with Can’t Buy Me Love, to cite one example. There’s also the idea of depicting most adults that aren’t the Beatles as unhip, but that might be due to the target audience the film was aiming for. Oddly enough, A Hard Day’s Night hardly ever shows the band interacting much with their fans or talking about them, which shows that they do have other things in mind rather than thinking about the people who obsess about them madly. But then again, neither Lester nor the Beatles or the film’s producers would want to show the darker, non-sarcastic side of being a celebrity for obvious reasons.

Recommendable to watch if you like the Beatles or if you’re curious enough to see pop culture from the 1960s on the big screen, and it’s even better thanks to the recent restoration it went through in regards to video and audio (it’s amazing especially for the songs). Extra quarter star for the restoration.

P.S. 1: Among the fans, you can spot Patricia Boyd (Harrison’s would-be wife) and a young Phil Collins.
P.S. 2: For people living in Lima, visit UVK Multicines’ webpage for information on how to get tickets for A Hard Day’s Night in Lima.