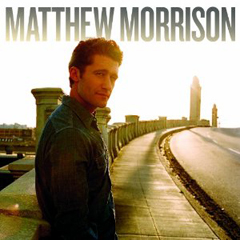 * Songs featured in an album from the collaborating artist.

Mr. Schue decided to leave New Directions behind so he could focus on his new album and gather enough success to eventually land a spot on Broadway or something better.

Not really. Sorry to dissapoint those who were hoping that Matthew Morrison would leave Glee.

Anyways, Matthew Morrison has just released his self-titled debut album earlier this month, and it includes collaborations from Sting, Gwyneth Paltrow and Elton John, as well as American Idol Season 8 winner Kris Allen (Still Got Tonight) and former N*SYNC member JC Chasez (Hey and Don’t Stop Dancing) on the songwriting. While I’m not surprised that Matt got Gwyneth and Elton to work with him (the former being good friends with him and the latter is a fan of Glee), I wonder how he managed to get Sting on his debut album.

After listening to Matthew Morrison, it’s not a bad album, but I wouldn’t say it’s really great. The first half of the album is actually good to listen to. The second half, not so much. Summer Rain, the album’s lead single, is pretty much about having sex on the rooftops. And Hey is a pretty good upbeat song. But Don’t Stop Dancing really makes me cringe and fails at being a dance pop anthem.

In regards to the collaborators, Sting and Matt paired together was surprisingly well executed and Let your Soul be your Pilot was the best track among the collaborations in my opinion. Somewhere Over The Rainbow, pretty much Matt’s signature song at the moment, made me think it wasn’t necessary to include Gwyneth Paltrow on it other than cashing in on Paltrow’s popularity among Gleeks. And when paired with Elton John, it doesn’t make Matt sound good in any way, shape or form because the difference between Elton and him are drastic and hearing both of them together sounds kind of awkward.

All in all, the album isn’t exactly mainstream-sounding, thankfully rap-free and it does have its share of positives and negatives, but it’s mostly a good effort. But there is room for improvement, as the album isn’t exactly impressive. I would recomend Matthew Morrison for those who enjoyed hearing Matt singing before. Otherwise, don’t bother.

Maybe other Glee cast members will try to launch their own albums just like Morrison and Mark Salling did.

Best track: For me, I enjoyed Hey the most. Sounded chill and relaxing.

P.S.: Still Got Tonight will be featured on the season finale of Glee Season 2.

Preview it at Xiami.com | Like it? Buy it at Amazon or iTunes