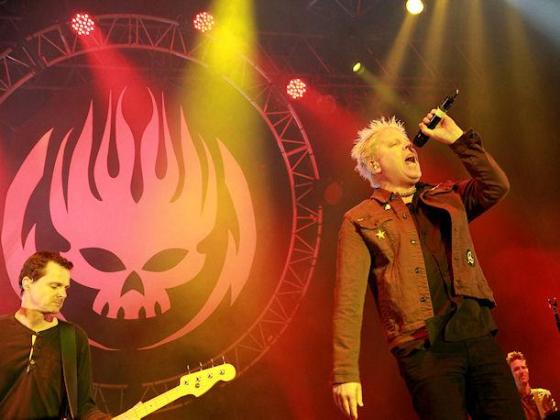 One of my concert-related dreams finally happened and I got to see The Offspring performing live.

I arrived to the concert with a friend. Peruvian band Inyectores was the opening act, but my friend decided to get drunk with his other friends before The Offspring played, so we missed out on them… sorry Inyectores. But Noodles approves of them (he thanked them and the crowd before playing Pretty Fly), and that’s good.

I managed to get into the concert just in time to hear All I Want, which made me very happy but the opening almost froze me because parts of the crowd were just being “latinos”, but that somehow improved during the concert. This time, however, I simply didn’t gave two shits about the crowd and with the few friends I had around me, we spent the entire concert jumping around, singing and dancing to every song played, flipping fingers, drinking beers and everything else that usually happens in concerts. If you’re going to see a band you’ve been dying to see for many years, you might as well enjoy it to the fullest.

The setlist was pretty much the same as it happened in recent Offspring concerts. Maybe Days Go By should have been moved to the encore to add a bigger impact. I would have loved to hear Genocide [Xiami], Dirty Magic [Xiami] and She’s Got Issues [MV] live, but I was just happy to see them playing live and I enjoyed hearing Want You Bad, Gone Away and the songs from Americana and Smash the most . Dexter Holland’s vocal power may not be as powerful as it used to be, but that’s something you would expect to happen over the years. The band still delivered and Noodles in particular stood out because he embraced the crowd (and Cerveza Cusqueña too) the most and even wore a chullo [1] near the end of the concert.

By the time The Offspring ended their concert, people complained about the concert being very short in length. I understand: the concert pretty much lasted 1 hour and 10 minutes, unlike Green Day’s Lima concert which had more songs and lasted almost 3 hours. My friends and I tried a Genocide chant, but nothing happened sadly. But that’s how The Offspring rolls. Any fan should know that their songs aren’t lengthy by any means — this comes with being part of the punk genre — but we got 20 songs out of them and they should be glad for that and not having to hear something such as California Cruising [MV] or being told off like it happened with Limp Bizkit’s concert from two years ago. For me, this concert will be hard to forget and I mean this in a good way.