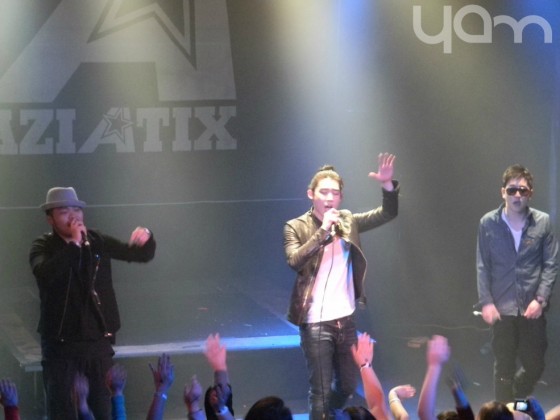 I had the pleasure of seeing Aziatix perform here in Minnesota once before, last November. Minnesota isn’t known for getting many international acts on tours, so imagine my surprise when they announced their tour with us on their list again!

Lucky for us, the Fine Line is a small cafe-like venue that allowed the fans to interact closely with the guys. We had a small crowd for the night, but it was pretty big considering the concert was on a Monday night. The fans busied themselves before the show chatting with each other and buying up the items for sale at the merch booth. Doors were open at 7:o0, and the stage was empty for a bit before the two opening acts hopped on stage and did their thing.

Then, around 9:30 or so Aziatix came out the side door and took the stage, with obvious approval from the screaming ladies in the audience. At the start of the show, the sound system wasn’t set up properly and when the guys got too close to one another the microphones would cause squeals of interference. I could see the frustration on the faces of Flow and Nicky, whom had it happen the most. But after the first few songs of their set they fixed it, thankfully.

Once the technical issues were out of the way, Flowsik, Nicky and Eddie lit up the stage with enthusiasm and energy. Admitedly, they are hard to capture on film because they are so busy bouncing from one side of the stage to the other, interacting with fans and performing with all their hearts. Flow graced us with his speed-rapping talents, which never cease to amaze me. My favorite thing about the way they perform, though, has to be the fact that they involve the crowd. From high-fiving fans and wiping sweat on t-shirts when they are offered, to getting the fans to participate in songs, it’s just a great feeling to know they are that connected to their fans.

So in spite of the technical failures, the Aziatix gents managed to engage the audience, rock the stage and have a great time themselves. The venue had great service, good lighting and they were very accommodating of a band that comes with a gaggle of screaming ladies. In all, the experience of Aziatix this time was better because of the smaller venue. It didn’t feel like they had to struggle to fill a large space, it was more like they were having fun with their fans. Even though I highly enjoy these small intimate settings, I also really want them to get so big they can fill huge stadium sized concerts. So if Aziatix is hitting your city on their tour, be sure to hit them up and give them a listen. You definitely won’t be disappointed.

Aziatix are about to embark on the second leg of their U.S. tour. To see where they will be heading next, visit their oficial site.