I love Hip-Hop shows. The reason for this is mostly because of the fans. Heaps and heaps of tiny wannabe gangsters who arrive to the show in crews all walking with street swagger, I love it. The Jeezy show this night was no exception. This year turning 35, Young Jeezy isn’t that young anymore, but his fans are still loyal to the Atlanta-born hip-hop legend. 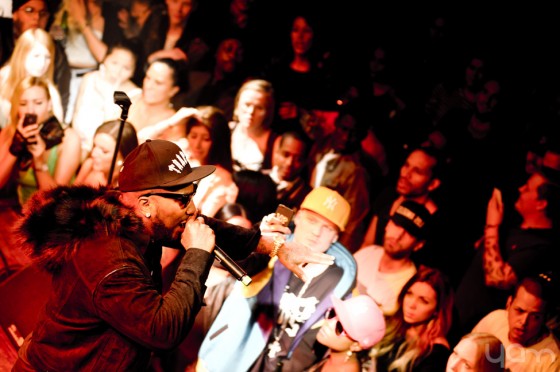 But still, I almost feel ashamed to welcome this big Hip-Hop name to a club like Göta Källare. He was made for bigger arenas and bigger crowds. However, I don’t want to disrespect the audience, they really made the place bigger and created a good atmosphere.

Even though Jeezy was 45 minutes late to the stage, the mood of the audience was still very good. As he entered the stage together with his DJ, the Canadian Baby Yu, who is following him on his tour, the mainly young crowd was screaming like crazy to give him their best welcome.

Jeezy started off with both classic songs and songs from his new album TM:103 Hustlerz Ambition. He also sang some covers from other artists like Tyga’s Rack City and Kanye West and Jay-Z’s Niggaz in Paris.

During the songs he took time to talk to the audience about some of his grandma’s words of wisdom, or go over to Baby Yu’s mixing board and have a zip of the Dom Perignon champagne that stood there.

At the end of the show he played more and more from the new album, and best was the performance of the song OJ, where he ended the song with a rap solo without any music. He made more of these rap solos in other songs, and you could tell that this was his way of showing that he’s still got it.

He didn’t play for very long, only about an hour, and that was, apparently, longer than he planned, according to the organizers. But many minutes after he left the stage after performing Waiting, the crowd was still singing and dancing  in the simple loges of the Göta Källare night club.