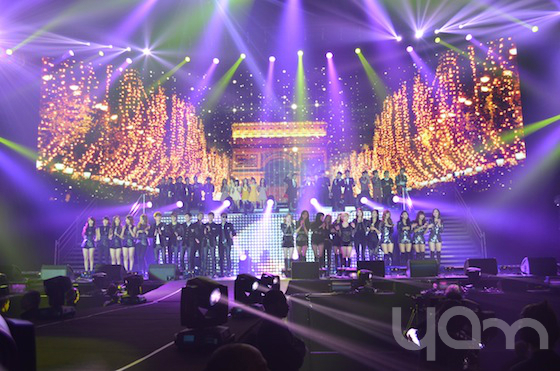 In all, it was one heck of a show. Just before, I was doing my rounds among the crowd. To no surprise, almost every country in Europe was represented. There were fans from Spain, Slovenia, Norway, Denmark, UK, France, Germany etc. Everybody was very happy, the atmosphere was high. Even the fans that had stood in line for over 10 hours (!) in the windy and freezing Paris weather.

This concert was one you didn’t want to miss. With KBS bringing their Music Bank to Paris (Music Bank is a weekly music show) they brought several Kpop groups that haven’t played in Europe before. U-Kiss, SISTAR, T-ara and 2PM are rookies to the European crowd, but hardly less loved than SHINee, SNSD, BEAST and 4minute. Afterall, I spotted so many 2PM fans and they got the biggest cheer once they got on stage.

I will say, it is a bit sad that each group only danced a mix of some of their hits and then sang two songs each. It felt like it was too little, even though the concert lasted for more than three hours. I don’t know how that happened. In between some stages, MC Lee Jangwoo and Sooyoung from SNSD talked to the crowd in Korean, with a small translation in French. This is where I have a sore thumb with this concert. Yes, it was held in Paris, but it was aimed towards the entire European crowd. And yet we only got translations in French and not English? Not all Europeans speak French. That was a small failure.

But the lack of communication didn’t bring the fans down. Everybody cheered wildly and sang along to all the songs. At times like this, it amazes me how cultural and language barriers can be broken and disregarded although they are so huge. Music bestows one heck of a power to get so many people from different backgrounds together. This time around, the age differences in the crowd was huge. Before, I have felt that most of the Kpop fans (at least here in Europe) have been in their late teens, early twenties. During this concert, there were more teens than ever, children, people over 30 (there was this group of friends sitting above me that were enjoying themselves so much. They danced and sang along to the entire concert) and those above 40. It was a true family event.

I think that the best parts of the show were the special stages. First between the girls (So Hyun from 4minute, Bora from SISTAR, Hyomin from T-ara and Hyo Yeon from SNSD) that did a dance battle that was so fierce, the crowd screamed like banshees. Then a special song stage featuring Junsu from 2PM, Taemin from SHINee, Hyounsung from BEAST and Kevin from U-Kiss, who sang More Then Words. It was magical.

This concert left me excited for the future of Kpop in Europe. The European fans showed what they are willing to do to attend a Kpop concert. Albeit being held on a Wednesday and in one of the more expensive cities in Europe, the venue was three-quarters full. I am sure that had it been held on a weekend and perhaps in a more accommodating city (anywhere in Germany or London) the concert would be sold out — perhaps something for 2PM to consider, considering the great response they got. I am sure Europe would love to attend their current Hands Up Tour. *winkwinknudgenudgeJYP*