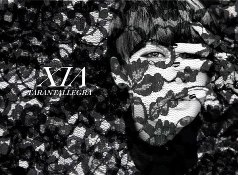 I can’t say I was completely prepared for this album. That’s mostly due in part to the fact that most solo Kpop isn’t much to write home to Mother about. It’s all either radio R&B or sugary pop, neither of which really appeals to me. However, starting from the album’s interlude you can tell that Tarantallegra is a completely different party monster all together.

Let me just get the obvious out of the way, there are very few in this world that can match Junsu’s voice. I could write a 12-page dissertation about his technical perfection; however, if we isolate the album for the music itself, things can get a bit interesting.

The dance tracks, those that we know will manage to make a lot of fangirlies swoon, are the tracks that are the least impressive. But, of course, I may not be the best judge of dance music’s new direction as I’m not at all a fan of it. So tracks like Set Me Free — which sounds more Womanizer than, say, Mission — instantly set my nerves on edge. However, title track Tarantallegra, though not exactly my finger of brandy — especially considering he made the Cardinal Sin of using auto-tune — is a dance track that is surprisingly edgy, considering the current climate of Korean dance music.

But the obvious selling point of this album is the ballads. Let’s be real, Junsu’s voice was made to be surrounded by heavy bode instruments and intimate piano arrangements. Even Though You Already Know and I Hate Love are indescribably beautiful. The arrangements are magical, light in the right areas, emotional right at the moment when your heart breaks.

Then we discover that Junsu’s inclinations for R&B are truly unprecedented for someone so heavily schooled in pop music. No Gain (penned by long-time band mate Kim Jaejoong) and Lullaby are actually so gorgeous that I was surprised that they managed to find their way on a debut solo album.

And that’s what we have to remember — this is Junsu’s first foray into solo territory. Though the dance songs aren’t exactly my flavor, the truth of the matter is his voice is a beacon of absolute grandeur. It’s a master class of the marriage between technicality and emotion. As far as solo debuts go, Tarantallegra isn’t the best, but the balladry on this album is so gorgeous that the missteps, as few as they may be, can be forgiven. The smartest thing Junsu did was make this album about his voice, nixing the obvious dance pop route for mature, emotion laden ballads that highlight his most powerful asset — his voice. That, in and of itself, deserves respect.

Standout Tracks: All, and I do mean ALL the ballads.

Preview this album on Xiami | Like it? Buy it on iTunes.