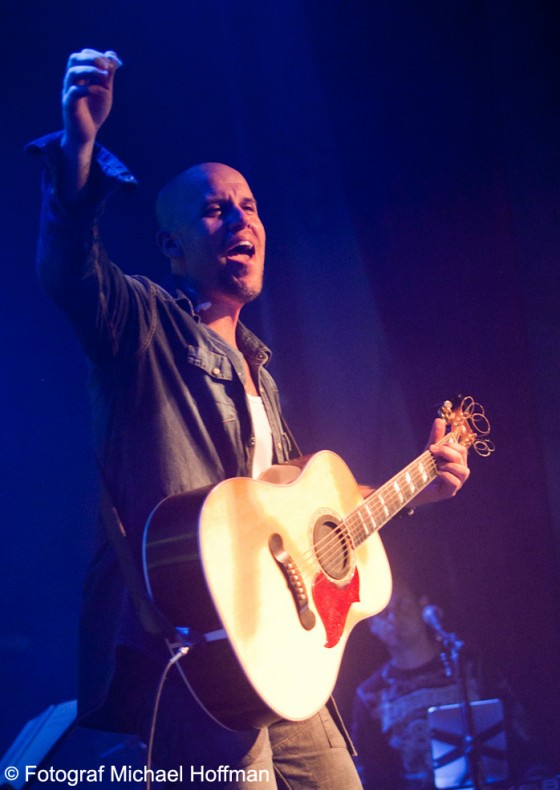 Gianmarco is one of Peru’s best known musicians, with his blend of traditional and contemporary music, he is well known by several generations. I didn’t grow up listening to him, but I did know who he was. Some of his songs are considered such classics in Peru that he has become a form of national treasure. Since he is also a well known composer, his music has been heard all over Latin America.

He just celebrated 20 years as an artist in style with a humongous concert in Peru where more than 20k people were in attendance. Then, he decided to go on a European tour, and that is when Selam managed to get him to come here (thank you Selam!).

I must say, watching Gianmarco play at the full Debaser Medis here in Stockholm, you get the feeling that he is an artist that is meant to be in a bigger venue. Yet, in this small place, surrounded by 1000 people, he still managed to make the place bigger than life. Wait, I guess I am jumping way ahead of myself. Or maybe not. You see, this was one heck of a concert. It was sentimental, funny, beautiful. In the span of over two hours Gianmarco took the audience on a journey, not only of happiness, but also of a musical history that few can boast of. Singing songs from his very vast musical career, it was a pleasure listening to the crowd singing along to some of his more known songs.

I mean, the crowd was mostly people over 30, with a lot of older women accompanied by their children (like me) but it was still a very mixed crowd, which proves how well loved Gianmarco is as an artist.

I was raving about how proud I felt as a Peruvian as Gianmarco was playing. He somehow made it feel like we were in Peru and not Sweden. I don’t know if that is good or bad. As my aunt explained it, “He made us feel a little closer to home.”

I left the concert ecstatic and euphoric, filled with such joy that as I listen to Gianmarco’s latest release, 20 Años, a compilation of his greatest hits, I feel overly giddy. I feel very privileged that I was able to experience his performance in such an intimate venue — at the end of the show, he shook my hands twice and blew me a kiss, I was that close — I could clearly see, listen to and feel why he is such a great artist. Everything about him screams musician, and I am sure everybody left that venue feeling nothing but pride. Proud of being Peruvian, proud of our music, proud of our traditions, and proud of Gianmarco.

I can’t wait to see him live again.

All pictures by Michael Hoffman

When Gianmarco did an acoustic set of some of his most famous ballads, the entire crowd sang along and cried to Hoy [MV], which he wrote for Latin American diva Gloria Estefan back in 2003.

Everybody dancing along and stamping their feet when he sang Lejos de Ti.

Gianmarco’s clear and pitch perfect voice that never faltered during the concert.

The fact that people went nuts, screamed out lyrics, danced and clapped all night. There was not one silent moment.

Gianmarco managed to build the energy of the crowd and kept it high for over two hours.