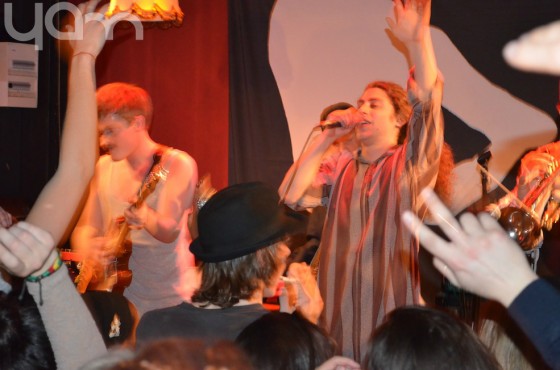 There was a moment towards the end of the show when I had this really silly grin on my face. I looked up to my friend and told her that I felt so good, so, so, so good. I was in some form of musical high and I was just so happy.

Swedish hip-hop is a genre that used to be very close to my heart. When I was a wee girl, Swedish hip-hop was on the rise with artists such as The Latin Kings, Petter and Thomas Rusiak. Then Timbuktu happened, Fjärde Världen stole my heart, I obsessed about Fattaru, Snook added a different flavor to the scene, Medina got everybody dancing with their oriental influences, Ison & Fille became the IT guys and Adam Tensta came almost out of nowhere and became the new Swedish hip-hop king.

I was that involved in Swedish hip-hop, until Kpop stole my attention away. But we take a jump to 2012, several emails from different promoters and I am back in the hip-hop Swedish scene. It started off with Professor P & DJ Akilles, back to Tensta and that is how I found Mofeta & Jerre.

My friend asked me to come with her to the concert. I Googled the guys, gave it a listen and said why not? And why not write about it while I am at it?

From what I have gathered, these guys are on the rise in Swedish hip-hop. This year they were awarded with Hip-Hop Album of the Year at the Manifestgalan (a Swedish award for acts signed by indie labels). They have got great reviews for their latest album Briljanter & Smaragder and they have a very established fanbase.

Seeing Mofeta & Jerre live is pure love. There is so much energy being thrown around in the room, so much fun. Mofeta raps quickly, keeping up the high tempo all night long. Jerre plays his guitar and sweats like he is playing for his life. Add to it the amazing Spiderdogs band, all that soul, jazz and funk, and this concert turned into a potpourri of music genres with a whole lot of jam.

The Swedish hip-hop of today is very different from the hip-hop I used to know. Today the sound is very influenced by so many other genres. It has developed from a very concrete jungle to a modern urban sound. Swedish hip-hop today is very playful and soulful and Mofeta & Jerre is a great example of that. Although I didn’t really hear their music that well, I had no issues getting into the mood of it all, singing along and swaying my hands in the air. I fell really hard for some songs such as Briljanter & Smaragder and Balsam (woah, did I fall hard for that song). Then Mofeta & Jerre delivered during the very serious yet beautiful song Lilla Flickan. The crowd went nuts with Väderleksrapport and Bättre i Berlin.

In all, this was one of the grooviest hip-hop shows I had the pleasure to see. I am still very giddy as I write this review. Mofeta & Jerre are a pleasure to see live and I really can’t wait to see them again. This time I will know all their songs by heart so that I can sing along to every single one of them.